There is a continuing controversy about an unidentified carcass of a 'Sea Monster' found off The Gambia and popularly named Gambo. From Wikipedia:
http://en.wikipedia.org/wiki/Gambo

'Gambo' is the name given to a carcass of an unidentified large marine animal that was reportedly washed up on Bungalow Beach in The Gambia. The carcass of the Gambo was reported to have been discovered by 15-year-old Owen Burnham and his family on the morning of June 12, 1983. Owen, a wildlife enthusiast, decided to take measurements and then make sketches since he did not have a camera at the time. According to later testimony, he did not think to take a sample until after he realised he could not identify it in any books. According to Owen, local villagers called it a 'dolphin' but that was likely only because of the superficial similarity.
The carcass was later decapitated by local villagers, and the head was sold to a tourist. Its body was then buried and attempts to relocate it have failed. After Owen mentioned the carcass in a newspaper article three years after the event, it caught the attention of cryptozoologist Karl Shuker who requested more information on the carcass. According to Owen, the carcass showed little or no signs of decomposition and measured around 15 feet (4.6 m) in length. The colouration was brown on top and white below, and the skin itself was smooth. The most specific measurements were taken on the head, which was 4.5 feet (1.4 m) in length. It had a beak measuring 2.5 feet (0.76 m) long, 5.5 inches tall, and 5 inches (130 mm) wide with 80 uniform and conical teeth. A small pair of nostrils were present at the tip of the beak. The somewhat domed head measured 10 inches (250 mm) tall and 1 foot (0.30 m) wide, and had small eyes. The front pair of flippers measured 1.5 feet (0.46 m) long by 8 inches (200 mm) wide. One of the rear flippers was badly damaged and nearly torn off, revealing some intestine. The waterlogged and bloated body was around 6 feet (1.8 m) long with a 5-foot (1.5 m) girth. No fin was present on the top of the animal. The tail was long and pointed, and measured around 5 feet (1.5 m) in length.
There has been a great deal of speculation as to what the carcass could have been in life. Some question whether the carcass ever existed in the first place, as with the case with paleontologist Darren Naish. Naish expresses doubt that the carcass was real, and finds it suspicious how no sample was taken. Cryptozoologist Chris Orrick proposed that it was a severely mangled Shepherd's Beaked Whale that was twisted so that the dorsal fin and genital slit lined up, giving the appearance of a torn off limb. Loren Coleman and Patrick Huyghe speculated that it may be an unknown form of Beaked Whale. Another common suggestion is that the carcass is some sort of surviving prehistoric reptile. Shuker proposed initially that it was either a pliosaur or a thalattosuchian crocodile, but later referred to it as 'the last of the mosasaurs.' A 2006 expedition by the Centre for Fortean Zoology failed to uncover any remains of the creature at the alleged burial site. They also learnt from local people that the carcass was possibly that of a dolphin.

'Gambo' has been connected to many sporadic reports of crocodile-like sea serpents.

References
There are Giants in the Sea. Bright, Michael. Robson Books, London, 1989.
In Search of Prehistoric Survivors. Shuker, Karl P.N. Blandford, London, 1995.
The Field Guide to Lake Monsters, Sea Serpents, and Other Mystery Denizens of the Deep. Coleman, Loren and Huyghe, Patrick. Jeremy P. Tarcher Publishing. November, 2003
This is another case where I had added different information to the Wikipedia article, which was subsequently removed. In this case I w 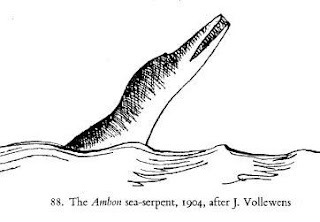 as not arguing for the identity of the carcass but drawing attention to the fact that the description was indeed close to two reports listed by Heuvelmans as possible 'Marine saurians' but off the coast of EAST Africa, at the end of the Red Sea.
These reports were sent along by the same Nederlandisch sea captain and both compared to a 'Smooth caiman.' The captain's own report was listed under the ship's name Ambon and the report dated to 22 October 1904. At the time, J. Vollewens was Third Officer and the Captain was G. A. Zeilanga. Vollewens later sent a report to A. C. Oudemans and he said then the head was raised above water for a little more than half a minute, was black above and white below. The head was raised about eight feet out of the water and both jaws were lined with many sharp-pointed teeth about 4 inches long. A fin was momentarily seen behind the head and could have been either a dorsal or a pectoral fin. The diameter of the neck where it met the water was about 2 1/2 feet. It was surrounded by several smaller animals like young sharks, probably travelling along with it to catch scraps.
A similar creature was sighted by the Java off Somaliland in 1906 and Vollewens also reported that one to Oudemans. (In The wake of the Sea-Serpents, pages 374-376)
Heuvelmans states in the text that it is probably an odd odontocete but it could never be a type of beaked whale because of the many teeth in the jaws. However, in the tables in the back of the book, these reports are treated as Marine Saurians and they are so indicated on his map.
It would seem that the Ambon Sea Serpent was slightly larger than Gambo, possibly 20-25 feet long; and all speculations that this type of animal would be 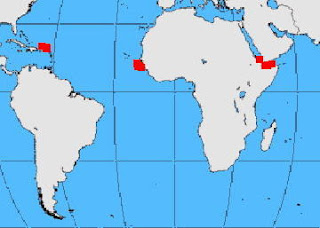 any sort of cetacean or crocodile would be mistaken. It is more likely a smaller form of the regular Marine Saurians, but there is no telling whether it would be the younger size of the same species or possibly a dwarfed variety. The colouring is also unlike the usual Marine Saurians. It cannot be a crocodile because the skin is smooth and it cannot be a cetacean because it has hind feet.

I include a map to indicate the carcass and the sightings. I also indicate (tenatively) that there might have been another corpse of this type found off Puerto Rico in 1964 according to information in Ivan Sanderson's files.

But Darren Naish's belief that there never was a carcass seems considerably less likely now - as indeed are nearly all of the other alternative suggestions.
Posted by Jon Downes at 11:03 AM

Dale Drinnon: [I] "added different information to the Wikipedia article which was subsequently removed...I was not arguing for the identity of the carcass but drawing attention to the fact that the description was indeed close to two reports listed by Heuvelmans as possible "Marine saurians"".

Ye', they're terrible for that.

They originally included Madeleine Ennis' observation that subsequent researchers' failure to reproduce her experimental 'homeopathy' results might be due to the fact they'd carried out a different experiment with a different protocol using different materials - now there's no mention of her observations at all, leaving the distinct impression her results've been disposed of.

...makes you wonder who's really in charge there, and what they're afraid of.

To me there should at the very least be links to observations like yours, which I find highly intriguing and, I suggest's precisely the sort of thing that'll stimulate the imaginations of the researchers of tomorrow.

Then again, maybe that's PRECISELY why they do it!

Hi. My views seem to be totally misrepresented in this article: I don't remember ever saying that the 'Gambo' carcass never existed. Rather, I'm on record as saying that Burnham most likely misidentified a carcass belonging to a known species of cetacean.

Hi Darren, perhaps you should take that part up with the Wikipedia as well, for Wikipedia is the source of that statement, as indicated by the link in my article: I was merely quoting it.