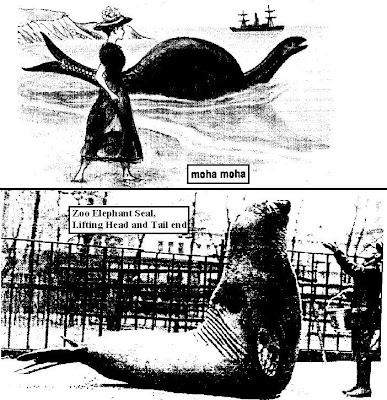 I recently came across a mention of the Moha Moha while doing research on something else. The quote is from this internet site: http://everything2.com/title/Moha+Moha

'Nessie of Loch Ness has her own publicist. The various mane-necked sea-serpents that swim the Pacific Ocean-- Caddy the Cadborosaurus, Penda, the Old Man of Monterey Bay, the tanihwa-- share a description consistent enough that their possible existence is worthy of further study. The New England Sea Serpent launched a scientific investigation and received an honourary degree from Harvard University. The Kraken managed to swim its way into the text books, in the form of the giant squid (Architeuthis) and the Colossal Squid (Mesonychoteuthis)-- and evidence exists that The Colossal Octopus also scuttles beneath the seas. The Australian bunyip has been the subject of children's books. The Ogopogo has its own theme song, Oscar of Churubusco has an annual festival in its honour, and the Silver Lake Monster, a controversy over whether it was an actual hoax or a hoax about a hoax.'

But nobody seems to recall the Moha Moha.
It's an engaging-looking chimera. Reportedly, this inhabitant of Queensland's Great Barrier Reef resembles a giant long-necked turtle with the tail of a fish. Miss S. Lovell, a school marm from Sandy Cape on Great Sandy Island reported the following, in 1890:

We have had a visit from a monster turtle fish. I send a sketch of it. It let me stand for half an hour within five feet of it. When tired of my looking at it, it put its large neck and head into the water and swept round seaward, raising its dome-shaped body about five feet out of the water, and put its twelve feet of fish-like tail over the dry shore, elevating it at an angle. Then, giving its tail a half-twist, it shot off like a flash of lightning, and I saw its tail in the air about a quarter of a mile off where the steamers anchor...The jaws are about 18 inches in length; the head and neck greenish-white, with large white spots on the neck, and a band of white round a very black eye... The body was dome-shaped, about 8 feet across and 5 feet high, smooth, and slate-grey in colour. Tail about 2 feet, the fish part wedge-shaped, and fin of chocolate-brown. Then beautiful silver shading to scales size of thumb nail.
Her correspondence, forwarded to Land and Water, went on to indicate the scales were perpendicular to the axis of its body, and related a tale of how it had reportedly attacked an Aborigine camp eight years earlier.
The editors of Land and Water suggested it might have been a Fly River Turtle, which has a long neck. They made no attempt to account for size; the Fly River Turtle does not exceed 3 feet in length. Various suggestions have been made for the tail: that a shark or other fish was biting the large turtle's behind, for example. Lovell's letters steadfastly maintained that it was a monster, "half fish, half tortoise.'

Many books in the decades following the only recorded sightings of the Moha Moha have devoted space to this creature. Bernard Heuvelmans's In the Wake of Sea-Serpents, the classic text on marine Cryptozoology, examines all of the correspondence, and identifies contradictions in Miss Lovell's accounts. Heuvelmans also notes that scales perpendicular to the axis of an animal's body are a physical impossibility, if it is to use its tail to any advantage.

Some later writers who have bothered with the tale wonder if Miss Lovell even existed, or if the letters were the product of some anonymous hoaxer. Still, she apparently was consulted by William Saville Kent, assistant curator of the London Natural History Museum, when he wrote The Great Barrier Reef of Australia. He christened the species Chelosauria lovelli 1890. A little over 100 years later, neither devotees nor souvenirs mark the Moha Moha's brief, dubious existence.

Today, even the cryptozoologists avoid mentioning its name.

My own interpretation is that Miss Lowell had seen an elephant seal on the Great Barrier Reef, gave a fanciful description of it, and when she was called on that description she became more obstinately certain she had seen the creature exactly as she had described it. Her first descriptions seemed to be more indefinite and her later ones increasingly definite and increasingly peculiar.
Another internet site provides this additional information:
Posted 24 June 2007 - 10:41 PM
IN 1891, the UK magazine Land and Water printed S Lovell's report of the Pacific Ocean moha-moha. She was a naturalist, who had 2 plants named after her.
[emphasis added] The Australian Aboriginals knew it well, where it was witnessed by 2 lighthouse-keepers, 2 other men Lovell and 3 others who signed a statement. It is "moa-moa" in the Pacific Islands [this would appear to be a mistaken reference]. The beast has a fishtail 12 ft. long, a central turtle-shell and long neck. When it lay on the beach of Fraser Island, Queensland, the shell was 5 ft.high. One had invaded an Aboriginal camp 8 years previously and put its legs on the shoulders of a man and knocked him down. In the same article, Lovell described a "womang", unknown then, but now seen as the manta ray. http://www.unexplained-mysteries.com/forum/index.php?showtopic=97010&st=30

I can well believe an elephant seal would be capable of rearing up to such a height that it could knock a man down by its foreflippers. But in that case it is far more likely the man was knocked down by a swipe of its neck. That is the way the seals fight. And he would be pretty much lucky he was not bitten in half in such a case.
Posted by Jon Downes at 11:55 AM

This news clipping about the Moha Moha might be of further interest...

What is not often mentioned is that Saville-Kent got the gender of his animal wrong. It should be the feminine lovellae, not lovelli (masculine). In any case, the name is invalid, because it was given without a type specimen.
In her original article, Miss Lovell called it a "moka moka". "Moha moha" is probably a result of Saville-Kent misreading her handwriting. The latter is impossible to pronounce in Aboriginal languages, which do not have an "h", and it is extremely difficult to pronounce in English.

The drawing has always reminded me of a pliosaur.