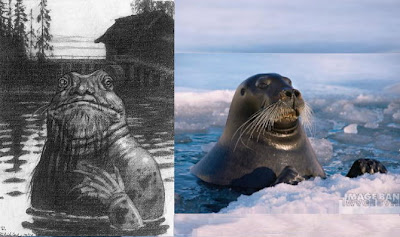 There are several recorded sightings of what are reported to be big ugly mermen in lake lonster lore. One such creature is said to inhabit Thunder Bay in Lake Superior (first reported 1792 and subsequently called a 'Merbeing')

I am attaching an illustration of a Vodyany, in this case a Russian 'Old Man in the Waters' in an illstration from my edition of Larousse Mythology, a drawing made by Ivan Bilbin in 1934, and in direct comparison to a bearded seal in Spitzbergen (Arctic Ocean). The bearded seals can turn up in the oddest places, most notably once recently inland in Florida, but also sometimes in the Baltic sea and even in Japan. In the article in question in Larousse Mythology, the location of Olonets in Karelia is specifically mentioned, although similar reports come from adjoining parts of Russia and nearby Finland.

This is not the only kind of Vodyanoy: in central Europe the name attaches to a sport of aquatic dwarf that wears raggedy clothing and a broad hat, and another version is described as being a large frog or salamander that sometimes looks like a log that moves against the current, and which seems to include the 'Pskov crocodiles' as one of the variants. This would be the giant salamander sort of creature, also known under a variety of other names in the Baltic countries.

But in the case of these Ugly Mermen of Karelia and Finland, I think we are plainly dealing with a type of large seal that has wandered inland. The same sort of creature could also be at the base of 'Merman' reports in the North Sea and especially around Norway. I remember reading in a book called Mysteries of the Sea that an identikit of merman reports was closely similar to a description of a walrus, minus the tusks.
Posted by Jon Downes at 9:07 PM

You probably know I have several groups for Page 3 Girls up on Yahoo and I am in contact with several of them, and you have the lead-in "Every man has to have a hobby". Ring up Peta Todd sometime and tell her she looks like an ugly merman, Thank you very much!

Seriously, I have been into the Merfolk thing probably longer than anyone else around and I have my own highly controversial theory about them, which you probably already know if you are a member of my group on Cryptozoology. And I have some reports that have come directly to me because of them.

The fact is that mermaids are often said to be beautiful, the ones in reports could be called "Cute" at the very best. Mermen are almost universally said to be ugly and bestial-looking.

That really is a striking resembalance. You might really be onto something there.