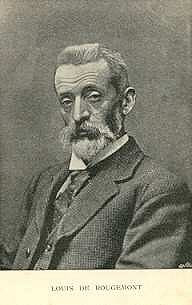 I’m sure that even in the annals of current cryptozoology there are a few ‘adventurers’ who claim journeys and encounters of veracity that in fact are nothing more than drama. Louis de Rougemont was one such ‘explorer’.
Born 12th November 1847 and named Henri Louis Grin, Louis would eventually go on to write for acclaimed British periodical The Wide World Magazine, speaking of his explorations through Australasia. These writings came after he dabbled in ‘spirit photography’ and also tried his hand as an inventor.
In his written episodes he would speak of travelling to great lost lands and encountering all manner of creatures and savages. From nocturnal confrontations with cannibals in the forests, to giant waves toppling him overboard into foaming depths. Rougemont’s tales intrigued me as I flicked through the creaking pages of the bound compilations of The Wide World, for not only was Rougemont stung by a ‘sting rae’, but also dragged into the depths by a monstrous octopus, and let's not forget his journeys on the backs of turtles, whilst also flirting with insanity caused by the eerie solitude of such explorations and his personal quests searching for lost pearls. You name it, Rougemont had done it and seen it. Hell, the guy even claimed that on one island he’d been worshipped as a god, whilst on another had observed a flying wombat!
However, his adventures reached a peak of strangeness when he recorded a couple of encounters with sea monsters. In The World Wide Magazine of August 1898 Vol. 1 No. 5 he wrote: ‘A terrible fright – we had anchored in about five fathoms, and when I was proceeding leisurely away from the vessel a monstrous fish, fully 20-ft long with an enormous hairy head and fierce, fantastic moustaches suddenly reared up out of the water, high in the air. I must say that the sight absolutely unmanned me for the moment and when this extraordinary creature opened his enormous mouth in my direction I gave myself up for lost. It did not molest me however, and I got back to the ship safely but it was some time before I recovered from terrible fright.’
The story was accompanied by a sketch showing a giant seal-like creature rising out of the water as Rougemont flaps in despair in the water.
In another adventure, Rougemont spoke of battles with sharks and also seeing another sea beast: ‘It was a monstrous, ungainly looking creature, nearly the size of a small whale. The strange way it disported itself alongside the ship filled me with all manner of doublings…’
So, was Rougemont an Indiana Jones of his time, or nothing more than a master fabricator of fiction, eager to earn a quick by selling his false tales ?
A majority of readers were quick to criticise not only Rougemont for his ‘lies’, but also the magazine for publishing such fantasy. The main problem with Rougemont’s tales, however, was the fact he could not pin-point exactly where they’d taken place. His vagueness was, so he claimed, down to the fact that he’d allegedly signed a non-disclosure agreement with an unknown syndicate in order to protect treasures on these lost islands. However, it soon became clear to critics that Rougemont was a storyteller; an entrepreneur eager to spin tales of wild frontiers. However, under his real name of Henri Louis Grin he wrote to what was then The Daily Chronicle saying he was upset to have been confused with Rougemont, as if stating he was a completely different person! Naturally, the controversy only boosted the sales of The World Wide Magazine and The Daily Chronicle.
Grin appeared in Australia in 1901 and was exhibited as ‘the greatest liar on Earth’, and was booed off stage. Five years later the often dismissed turtle-riding antics were re-enacted when Rougemont appeared at the London Hippodrome. Sadly, Rougemont passed away a poor man on 9th June 1921 in London.
Posted by Jon Downes at 12:13 PM