DALE DRINNON: Some Further notes about the Mapinguari

EXPEDITIONS: THE SEARCH FOR THE TRUTH

Paulo Aníbal G. Mesquita was the first to enter the interior of the Amazon region with the knowledge of the Mapinguari legend and the intent to investigate the possibility that this cryptid still exists—perhaps the last representative of the megafauna of the Brazilian Amazon. Bolivian folklore in the more mountainous areas includes a bipedal creature called the Jucucu (who COO coo), which may have some connectio 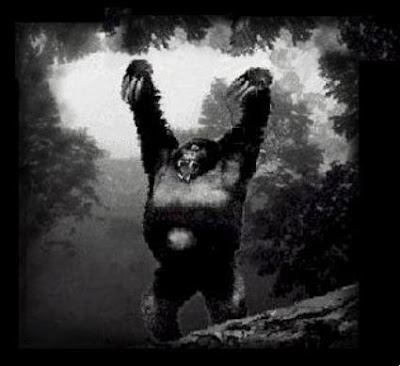 Mesquita's group investigated reports of the 'mapi' in some remote points of the Amazonian bush in the states of Amazon, Rondônia, Pará and Mato Grosso. In the latter they collected many stories of the indigenous people, some gold panners and others who reported observing this beast during the night. The stories were similar in several distinct points.

Witnesses affirmed that when they startled a Mapinguari, the mapi assumed a threatening position, rearing up and showing its robust claws. Some natives told of it emitting an extremely foul odour from its belly. The mapi possessed long brownish to dark brown fur, and some still claimed that its skin was similar to that of the Caiman. It was said to possess a flat snout and normally it was quadrupedal. The group was given to understand that a mapinguari violently attacked a landlord one night in a village in the extreme north of Mato Grosso, and that he was now missing. 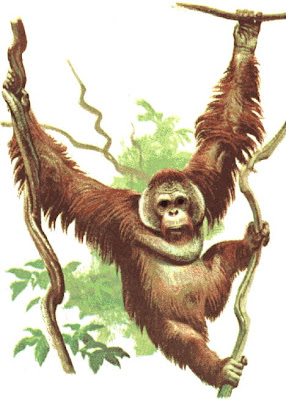 It is the threatening stance that drew my attention this time: when the Mapinguari raises up and waves its hands over its head, the effect is exactly like a chimpanzee or an orangutan and it is holding its hands up exactly the same way Cheetah used to do in the Tarzan movies. The Mapinguari is holding its hands in exactly the same way, and the 'claws' look exactly like the ape's hooked fingers. I would suspect from this much alone that the Mapinguari is ordinarily a large arboreal ape; its tracks seem to indicate that it does not ordinarily walk on the ground or the sole would lie flat rather than on-edge. 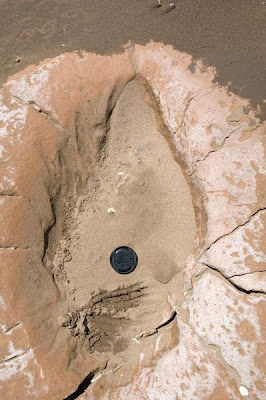 I also include a groundsloth track for reference, please note that it is a composite track including both the fore and hind footprints.

I also re-checked Sanderson's mention of Mapinguari, which he only spoke of as something that left 20-inch long tracks and ripped the tongues out of cattle. The missing tongues are merely another cattle-mutilation feature common the world over, and probably eaten away by feral dogs. So that part carries no weight. The 20-inch long tracks are something different, and are possibly Sasquatch-like tracks (neither Sanderson nor I had any good photos or even drawings of these tracks.)

The creatures that left the big footprints in this case were called neither Mapinguari or Ucumar, and Eberhart lists them separately. It might even be possible that the tracks (in this case only, and only the tracks) could refer to the alleged surviving groundsloth in a forest adaptation. Throughout Latin America ground sloths seem to be called 'hairy cows' because they are about the same size as ordinary cattle. Heuvelmans records the name 'Lobo-toro' and Sanderson recorded 'Cave Cows' in Central America.