THE TALKING CHIMPANZEE OF PITCAIRN 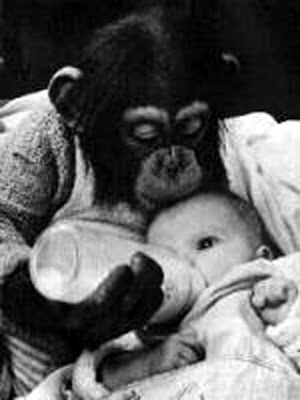 http://hubpages.com/hub/Mr-Moke-the-Talking-Chimpanzee
I spend more time than I should wandering, bleary-eyed, around the Internet. I am a member of various internet newsgroups on esoteric and unlikely subjects, and as one of the things that interests me are the few remaining British Dependent Territories (I guess that as a child of the Empire, this is hardly surprising), one of the newsgroups to which I subscribe is interested in the subject of Pitcairn - the tiny British territory in the South Seas that was founded by the mutineers from H.M.S Bounty.
Stuff from this newsgroup hardly ever impinges into the bloggo, but when I find a story about the only chimpanzee, indeed quite possibly the only non-human primate, ever to have visited Pitcairn, and when it is alleged that he could TALK, this is a story that really needed to be shared.
Posted by Jon Downes at 10:22 AM