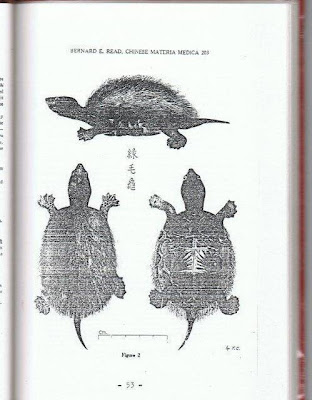 Today I`m looking at mysteries involving turtles, that is, cryptids and odd appearances, delving into the realm of folklore. Also, the information presented here cannot be presented in a strict chronological order because the starting point or origin of some of these cryptids in their impact on mankind cannot be accurately discerned.

Firstly, Dr Roy Mackal in his book A Living Dinosaur? (1987) records an animal the locals call `Ndendeki` - a giant turtle:

'Informants may have felt it was quite enough simply to say “giant turtle” about an animal whose shell was some 4 to 5 metres (12 to 15 feet) in diameter. Such a giant turtle hardly seems believeable, yet the fossil record includes both marine (Archelon ischyros) and land turtles ( Colossochelys atlas), their remains indicating animals 6 metres (20 feet) in length. However, not even the giant tortoises of the Seychelles Island (1.2metres, 4 feet ) approach the reported dimensions of Ndendecki….Based on reported descriptions, we require a very large, freshwater turtle, both carnivorous (or omnivorous) and amphibious. Marcellin Agagna was able to identify the Ndendecki as one and the same with Trionyx triunguis.' (1)

Michael Newton, in his Encyclopaedia of Cryptozoology, records a creature called the Carvana. 'This insidious predator of swamplands and lagoons in eastern Texas was described by a Mexican migrant named Aluna, who allegedly lost livestock to the creature in the mid nineteenth century. According to Aluna`s story, no Caravana was ever seen alive, though its remains were sometimes found during droughts, when its marshy habitat evaporated. On those occasions, local settlers and aboriginal tribesmen allegedly discovered skeletons resembling those of huge turtles, with shells 10-12 feet long and 6 feet wide, while the beasts head and tail resembled an alligator`s. In life, the Cavanar lay submerged in mud, waiting to pounce on prey that included livestock and human beings. Skeptics suggest that tales of monsters “never seen alive” refer to early discovery of fossil dinosaurs or Ice Age megafauna.' (2)

I now come onto folklore. In the late 1990s I bought a book called The Legend of A Giant Tortoise number 331 in the Asian Folklore and Social Life Monographs published by the Chinese Association For Folklore in Taiwan (1997). It was sent to Dr. Richard Muirhead (I have many faults, but I don`t think delusions of grandeur are one of them except when I`m ill!) at 9, The Grift near Salisbury when it was actually 9, The Croft. Anyway, most of this book is in Chinese, but there is enough in English to make it worthwhile to own. I cannot speak or read Chinese. On page 77 there is a long list of folklore motifs connected with `Tortoise, see also Turtle` and Tortoise`s…etc`. Some are quite amusing if you have my kind of sense of humour:

` Tortoise, see also Turtle….breaks elephant`s back…catches ogre helping him….has no liver or teeth…speaks and loses his hold on the stick….fight between ape and tortoise…..man transformed to tortoise…tortoise`s foolish association with peacock [I wonder what that`s all about?-RM] ….why tortoise`s neck is outstretched to sky; is looking for his wife,the star.`(3)

Page 55 of the above-mentioned monograph gives an extract from Bernard E. Read`s translation of a Chinese Materia Medica:

Lu Mao Kuei Green Haired Tortoises (a) Comments. Li Shih-chen. The green haired tortoise comes from Nei hsiang and T`ang hsien. In Li`s day they came from Ch`i chou (Hupeh) and were used as presents. Taken from the streams they were reared in large jars and fed with fish and shrimps. In winter the water was removed and after a long time they grew hair four to five inches long with some golden threads. The genuine article has a carapace with three ridges, the plastron is as white as ivory, and it is as large as the Wu Chu Ch`ien…Han Dynasty money.Other turtles if kept a long time grow hairy but they are larger, the hair has no golden threads, and the plastron which is yellowish black shows a difference. The Nan Ch`I Shu ….states that in the time of Yung Ming (A.D. 483) there were presented to the court green haired sacred turtles , which refer to this turtle. The Lu Yi Chi …..staes that in Hsuan Tsung`s time (A.D. 713) a Taoist presented to the court a small turtle one inch in diameter , golden colour, very lovely in appearance, it being said that placed in a bowl it would give protection from poisonous snakes. This is one of the marvels among turtles…Qualities. Sweet, bland,acid,non-poisonous.Uses. It increases the “Jen-mo” circulation (aortic?) It stimulates sexual desire, and menstruation. A seminal tonic. It increases erection. Ch`en Chia mo. Tied on the forehead it will prevent an attack of malaria; and placed on the book case it will keep away bookworms. (4) I HONESTLY didn`t make up the second part of that sentence! So, Jon, Lizzy, remember not to place a hairy tortoise shell on your bookcases tonight!

(a) Giles and Williams both state this is the green…terrapin from Szechuan on which a species of conferva grows. Two algae are said to grow on the Geoclemmys reevesii, Gray viz, the Cladophora glomerata and Basicladia crassa. Abs from Chinese Science. Soc. Proc. Nanning 1935. Aug.

The image is from Read`s Materia Medica showing the green-haired tortoise.

Around about the time I bought this monograph there was a story and photo in the New Scientist of a Chinese tortoise with hair growing from its shell.

Finally I look at Moka Moka, a giant turtle from Queensland. I couldn`t find it mentioned on the Web nor Newton's above-mentioned Encyclopaedia:

“Gigantic Sea Turtle.” Examples of this very large species of marine turtle have been recorded in areas of the South Pacific, and some fine skeletal remains have been recovered in Australia. Relatively current reports say that in Queensland there is a massive turtle known as Moka Moka. One report by a young woman named Lovell, a resident of that area, was recorded in 1890. She said that the sea turtle had either teeth or serrated jaw bones. She went on to state that “what I saw of it was about 27 or 28 feet, but I think it must be 30 feet in all. Whilst its head was out of the water it kept its mouth open,and, as I could not see any nostrils, I fancy it breaths through its mouth. The jaws are about 18 inches in length ;the head and neck greenish white, with large white spots on the neck, and a band of white round a very black eye.” (5)

Guide books (like the kind used for birds) don't really help when the animal is covered in algae.