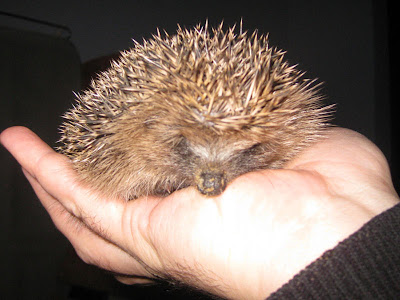 I have been actively encouraging hedgehogs to my back garden for the last two years. These delightful animals that many take for granted are in decline and are now a protected species here in the UK. I like to think that I am doing my bit for conservation - quite literally in my own back yard. I put out food and water on a nightly basis, and have a hedgehog feeding station where they can eat food in the dry and where cats can't get at it. I usually feed them on dried mealworms (their favourite), unsalted peanuts, sunflower hearts, and "Spike's Dinner" brand hedgehog food, which is very similar to dried cat food. Occasionally, if I can't get Spike's Dinner, I will put down dried cat food. They will also eat tinned cat and dog food (although nothing with fish in it). The biggest rule when feeding hedghogs is never give them bread and milk. Yes, they will eat it, but it is very bad for them especially the milk as they are lactose intolerant.

Lately hedgehog visits to my garden have been getting fewer and fewer. There is nothing sinister about this; it is the time of 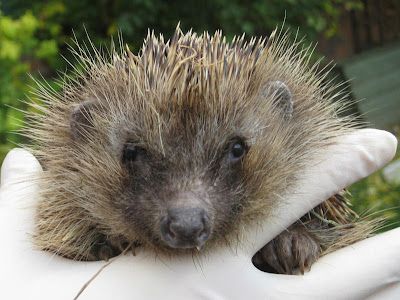 the year when hedgehogs are beginning to go into hibernation.

On Monday night this week I saw that there was a hedgehog in the feeding station that appeared to be having a whale of a time. It was sitting in a bowl of Spike's Dinner, turning in circles and throwing food in all directions (Hedgehogs are very messy eaters!). It was amusing to watch, but I was more concerned that the hedghog was small enough to sit comfortably in the bowl. I decided to take a closer look and 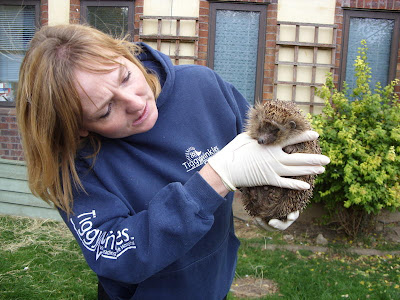 went out with a torch and took the lid off the feeding station. Yes, it was indeed a very small hog. I gingerly picked it up (I should have used gardening gloves because those spines are very sharp, but time was of the essence - the hog could run away in the time it'd take me to find the gloves). The hedgehog was so small that it fitted into the palm of my hand. I took it into the house to weigh it on the kitchen scales. It was 300g. What I had here was an "autumn juvenile."

A hedgehog needs to be over 600g to survive hibernation, and this little one was only half that. I decided that this little chap needed a helping hand. I couldn't let it go off to fend for itself as it would almost certainly not survive the winter.

I fetched a cat carrier box from out of the shed, and put the hedgehog into that with some bedding - my cat's blanket and a towel, plus a bowl of food and water, and kept it in overnight. It seemed happy enough. It would sleep for a while and then wake up and eat - every now and again I would hear it munching mealworms.

In the morning, having checked the hedgehog was still alright (it was a bit smelly, it has to be said), I telephoned Tiggywinkles Wildlife Hospital in Buckinghamshire. The receptionist confirmed that I had done the right thing and the hedgehog would need to be taken in to them.

Thankfully, it wasn't too far a drive. At reception a nurse was called and she fished the hedgehog out of the box and took him/her off to the nursery. I asked what would happen to the hog and was told that they'd try to fatten him/her up but it was unlikely to reach the required weight to survive hibernation, so the most likely scenario was that the little hog would be kept in the hospital for "overwintering" and released in the spring when it was big enough to make its own way in the world. Overwintering basically means that a hedgehog is kept from hibernating by keeping it warm and supplied with food and water. I was pleased that my hog was now in safe hands.

Whilst there I took a look around the visitors centre. Other than at the pond with a large selection of birds - ducks, geese, herons, and even a few juvenile herring gulls - there weren't too many animals to be seen, but of course animals such as foxes, badgers and hedgehogs are nocturnal and would be sleeping. There were windows into the nursery where a nurse could be seen weighing hedgehogs. Some of the autumn juveniles made my hedgehog look big! One of the Tiggywinkles staff offered to show me one of the permanent residents, an adult hedgehog who at some point had suffered a head injury. This hedgehog and others like it will live out their lives in the grounds of Tiggywinkles.

According to their website they currently have over 500 hedgehogs in the hospital and those are only some of the animals that they look after. Each autumn juvenile like the one I took in costs £111.50 to "overwinter." Tiggywinkles are doing exceptional work to support and conserve wildlife, as are other carers around the country, and like many such organisations they operate as a charity, so donations are always welcome. Alternatively, if you are ever in the area, do drop in and have a look around the visitors centre, which also includes the world's first and only hedgehog museum!

I found another autumn juvenile on Saturday, possibly a sibling of the other one. It was little bit heavier than the first one, but still too small to survive hibernation. I ended up having to take this one to Tiggywinkles too.