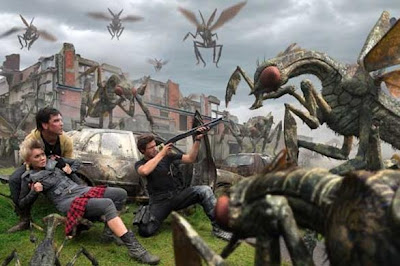 The picture on the left shows Jon, Corinna and Max out on their next trip to Ireland in search of material for YouTube trools to talk crap about. No it doesn't, of course; it is a still from everyone's favourite mildly crypto TV show, which despite being axed earlier in the year, has been brought back for at least two more series.

ITV has resurrected hit sci fi drama Primeval for two new series in 2011, after agreeing a ground breaking co-production deal that will see UKTV have the first run of the fifth series.

Just a shame we have to wait almost 2 years for it! Still, what with the delectable True Blood, the ostentatious Warehouse 13, fab Sanctuary repeats and a new series of Fringe starting this weekend, I am sure we are all well catered to :)