Richard's blog describing the Creepy magazines took me back to my childhood days of reading horror magazines and comics. Quite close to my home was a small market, and on Friday afternoons my parents and I would always have a look around the strange little shops that sold everything from cannibalistic hamsters, crucifixes, images of the Virgin Mary that glowed in the dark and Ouija boards; to plastic model kits of Mr Spock and Sopwith Camels. The place had a wonderful atmosphere. In the winter the market smelled of fireworks and Christmas, and in the warmer months, there was always the scent of cut grass and flowers, and lemon ice cream.

The high spot of the trip for me was the tiny bookstore almost hidden in the shadows by the side of a flower shop. The place was packed with old back-issues of American monster magazines, horror and super-hero comics and 'funny papers' such as Sad Sack--anyone know about that one?--and Mad magazine.

Most (if not all) of these were considered to be cheap rubbish by 'reputable' booksellers, and in fact, they only came over to Britain originally as ballast to counterbalance the ships that carried much more 'quality' fare, such as Vogue and sports mags.

Publications like Creepy and Eerie -- both produced by Warren Publishing, also responsible for Forry Ackerman's Famous Monsters of Filmland--and other titles like Weird, Zombie and Voodoo, were immediately dissmissed by the tabloid elite as degenerate filth, capable only of corrupting the minds and morals of helpless children everywhere, transforming their once gentle dispositions into those of blood-lusting, potentially necrophilliac monstrosities in human form.

It all sounded pretty good to me.

Ironically enough--and I'm sure to the total consternation of the guardians of our morals--as a result of reading magazines that were intended for teenagers and young adults, I could read and write fluently long before I started school, so what that says about the 'corruption' of young minds is something of a moot point, I suppose.

Anyway, I'll be putting up some of the magazines that helped to shape--and quite possibly warp--my younger years, and to follow Richard's lead, I'm starting with Creepy and Eerie. These particular mags had some of the best covers ever created, often by fantasy/horror supremo Frank Frazetta. Please go to these links for more great stuff. 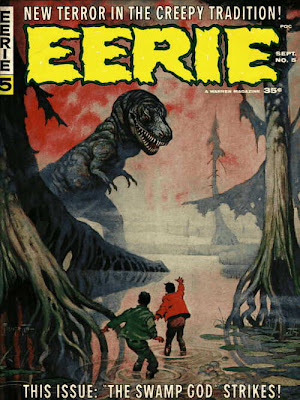 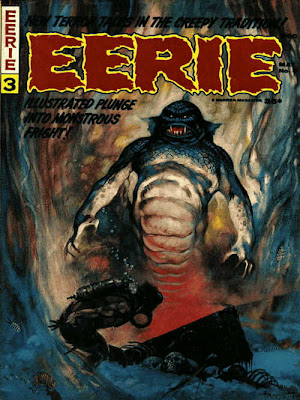 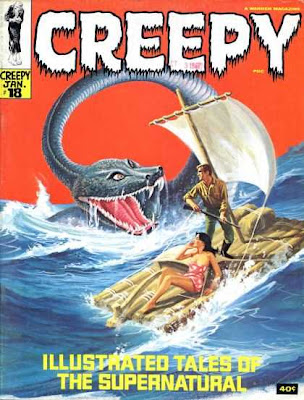 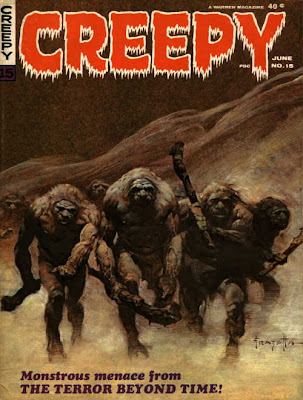 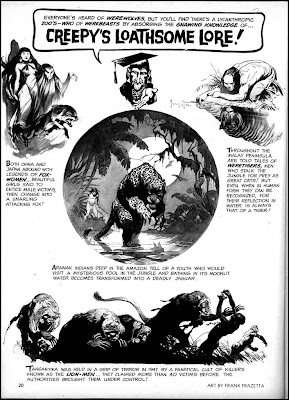 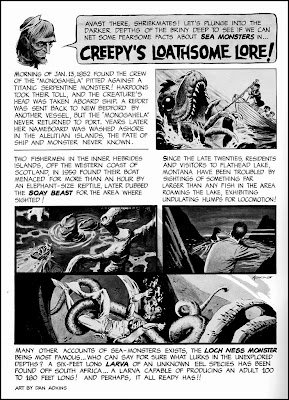 To quote from one of the pages in alan's article: "Both China and Japan abound with legends of Fox-Women ... beautiful girls said to entice male victims, then change into a snarling attacking fox !".

People, please rest assured that this is not a LEGEND .. it is fact.

Through out the world and through out history, every male who has been courting beautiful girls and ended up tied to them, will if he is honest, (and out of her ear-shot) will admit the truth of this. He will tell you that they are gentle as lambs but once the engagement turns to marriage they change into a snarling attacking fox or worse.

Sleep well you guys and marry a Cobra, you will be safer.