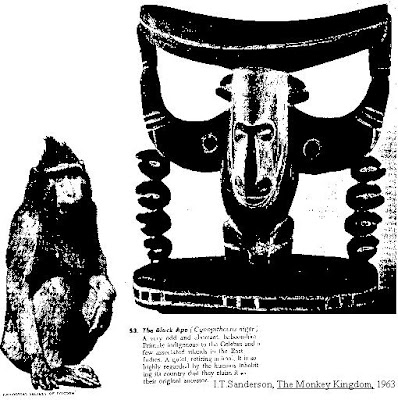 This is a file that I had added into the Frontiers of Zoology newsgroup when it was new: that probably accounts for some of the crudity of the copy. At that point in time the group had been named The Cryptozoology Exchange. Here is the escription that went with that file:
Headrest from New Guinea compared to Celebes 'Ape.' Sanderson denies that these were to be found on islands in the Papuan realm (as reported by others and mentioned in The Monkey Kingdom, source for photo), but they seem to have been exported by ancestor-worshipping cults and furthermore also exported to Polynesia; they would be the 'hairy little men' reported on Pacific islands including Hawaii and New Zealand.
This is the pertinent part from the checklist:
It is the opinion of the author that the reports of the 'Little hairy black men' Menehune refer to Celebes apes distributed by Melanesians for cultic purposes. 'Menehune' is the common Polynesian referent for Melanesians - see Heyerdahl. Celebes apes, according to Sanderson in The Monkey Kingdom, are seen as ancestors locally and have a puzzling distrabution, including islands of the New Guinean realm (although Sanderson doubts this): I have artwork comparisons, which satisfy me that some New Guinean 'Ancestor' figures (Called 'Baboon-faced') are representations of Celebes apes, and Heyerdahl indicates that the Melanesian Menehune went as far afield as Hawaii (We need not subscribe to his rather racist opinion that they did so as slaves) Hence, I have no problem with the idea that Celebes apes were distributed cultically
as far afield as Hawaii and New Zealand, where they later ran wild. This is also my explanation for several of Heuvelmans's categories of 'Little hairy wild men' in Melanesia itself.

[Sources on this include Thor Heyerdahl, American Indians in the Pacific and about a dozen books on Polynesian ethnology and folklore. I also noted that the identity of a Celebes ape in such cases wipes 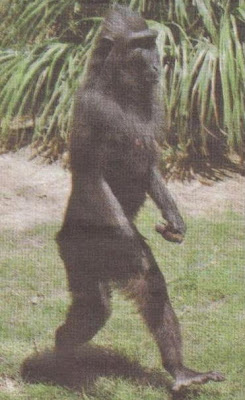 out anbout a half-dozen categories of purported cryptid species, since Heuvelmans makes a different category for each island group involved. I can certainly give you much more material on this if you require it; my homefile writeup on this is quite lengthy]

And here is message 198 to the group, dated

Sun Oct 29, 2006 1:29 pm :
'I am enclosing one of my paste-ups from my group, the cryptozoologyexchange. The caption to this follows;
*****
PAPUAN BABOON=MENEHUNE Headrest from New Guinea compared to Celebes 'Ape'. Sanderson denies that these were to be found on islands in the Papuan realm(source for photo), but they seem to have been exported by ancestor-worshipping cults and furthermore also exported to Polynesia; they would be the "hairy little men" reported on Pacific islands including Hawaii and New Zealand'

**** In my extended checklist on unknown animals commentary, I have a little more to say on this. I can send more info if anyone is interested. 'Mu and Menehune' are really references to small dark human beings, hence the Melanesians themselves (and real Pygmy types live in New Guinea) but usually is used any more to mean the 'little hairy men' (which are elsewhere said to go on all fours, have pointed heads and live in trees a lot). Heuvelmans's checklist refers to these under four separate headings for four separate islands in Melanesia, ending up with Fiji.

[The Fijian forms are alluded to in the passage below]

Cryptozoologist Loren Coleman and science writer Patrick Huyghe have suggested in The Field Guide to Bigfoot and Other Mystery Primates (New York and San Antonio: Anomalist Books, 2006), pp. 148-149 [that the Menehune are 'Proto-pygmies'].

On the other hand, Wikipedia, the free encyclopedia, in its article 'Menehune,' suggests that they may reflect a historical memory of early Polynesian settlers of Hawaii before the Hawaiians themselves, later mixed with imported European traditions of elves and brownies.

Dwarf hominids of the Proto-Pygmy type have been encountered in modern times on Pacific islands, including Hawaii and Fiji, Coleman and Huyghe note in their Field Guide. They describe the Hawaiian menehune, the best-known of these Oceanic 'little people,' as 2 to 3 feet tall, with short, stout, hairy and quite muscular bodies, red-skinned faces, big eyes hidden by long eyebrows, low protruding foreheads, and short thick noses. The menehune live in mountain forests and usually come to the lowlands only at night. A census of the Wainiha Valley in 1786 during the reign of King Kaumualii of Kauai supposedly revealed that 65 of the 2,000 people counted were menehune. Anthropologist Katherine Luomala suggested in 1951 that the menehune might have been a 'tribe of dwarfs.' In the late 1940s school superintendent George London and about 45 schoolchildren in Waimea, Kauai reportedly encountered a group of menehune playing around the large trees on the lawn of a local church. When the 'little people' saw the schoolchildren, the menehune stopped jumping in and out of the trees and seemingly dived into a tunnel under the parish house. According to the July 19, 1975 Fiji Times, encounters with menehune-like figures, 'believed to be dwarfs,' have also been reported from Fiji. The six witnesses of this Fijian mid-afternoon encounter described seeing eight figures, 2 feet tall and covered with black hair, run and disappear behind some bushes.

[References cited by Coleman and Huyghe include:

Wikipedia, in its Menehune article begins by noting that in Polynesian mythology, the menehune are similar to the elves or fairies of European folklore. They are 'trickster beings,
though usually merely mischievous and not cruel.' The chiefs of the menehune are called
Alii Menehune. The menehune range from six inches to two feet (15-60 cm) tall, according to Wikipedia. They are always naked but are covered by long hair. They are said to be afraid of owls. When the menehune become too mischievous and cause too much chaos, the owl-god
Paupueo sends all the owls to chase them into the forest. The menehune enjoy singing,
dancing, archery, diving, and sledding. Their favorite food was the mai'a or banana.

In Hawaiian legends, according to Wikipedia, the menehune are stonemasons and other craftsman, each menehune specialising in a distinct handicraft. The legends claim that the
menehune built temples, fishponds, and even highways--and build canoes and houses even
today. The legends also say that when the ancestors of today's native Hawaiians first arrived on the islands, they found dams, temples and other structures built by the menehune, who lived
in caves. Some Hawaiian men, according to the legends, married menehune women, and
had to teach them how to make fire and eat cooked food.

As the term menehune is also used to describe the original settlers of Hawaii while Manahun is used to describe the original settlers of Tahiti, according to Wikipedia, some scholars have suggested that the legendary menehune might be based on the historical Marquesans, the first seafaring Polynesians. The Marquesas Islanders are believe to have also been the first people to settle Hawaii. When the Tahitian invaders arrived much later, the original Marquesan settlers may have been shunned and driven into hiding in the mountains.

Remnant populations of this race, Wikipedia suggests, could have given rise to the legends of the menehune.

It is notable that an 1820 census of Kauai of by Kamuali'i, ruling ali'i of that island, found that 65 persons among the 2000 recorded claimed to be Menehune themselves.

The most likely theory, however, according to Wikipedia, is that the legends of the menehune are a 'post-European contact mythology' created by adaption of the term manahune (which by the time of the settling of the Hawai'ian Islands had acquired a meaning of 'lowly
people') to European legends of brownies, as suggested by Katherine Luomala in 1951. Menehune 'are not mentioned in pre-contact mythology,' according to Wikipedia. The legendary 'overnight' creation of the Alekoko fishpond by the menehune, for example, recalls the legend (Nordhoff 1874) about the creation of a corresponding structure on Oahu. That was supposedly indeed completed in a single day--though not by the menehune, but rather as a show of power by a local ali'i who demanded every one of his subjects to appear at the
construction site and assist in building--rather like the usual archaeological story of the building of the Egyptian Pyramids with the forced labour of conscripted peasants.

What many people don't know, Wikipedia concludes, is that there was supposedly a race present in Hawaii before even the menehune, a people whom the menehune had either driven out or
destroyed.

It is possible that the Polynesians brought a few over to these places, and their real equivalent is the so-called Barbary Apes of Gibraltar, which are really Barbary macaques (Macaca syvanus), which is a cold tolerant macaque from the Atlas mountains.

In the US, we have a feral population of Japanese macaques (Macaca fuscata) near Laredo, Texas. http://www.austinchronicle.com/gyrobase/Issue/story?oid=oid%3A283057

If their population were to spread, they could live in a lot of the US. This species is called a snow monkey because they are found in the snow country of Honshu, where it does get very cold in the winter. They are famous for bathing in hot springs: http://www.youtube.com/watch?v=17VKbzVOuqo

So there is some evidence that suggests that macaques are quite adaptable animals, and maybe they really were in Hawaii and New Zealand.