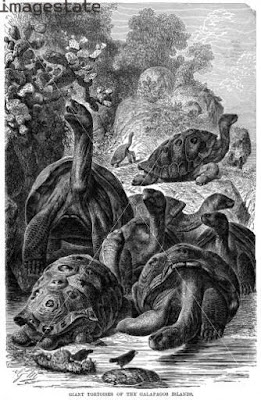 Following on from Richard Muirhead's recent postings on giant tortoises

Trivia bit on giant tortoises: inhabitants of several Pacific island including Hawaii have a traditional knowledge of Galapagos tortoises. There are stories on record when they were shown photos of the tortoises they would say "Oh yes, we know about those: we used to have some of those a long time ago"

This has been added to books about folklore amid head-shaking and disbelief. But there is an obvious solution: in the days of the big sailing ships when voyages were hard and provisions uncertain, ships would stop by the Galapagos islands and load up on some live tortoises to be slaughtered for meat along the way (they can survive a long time on minimal fodder). So at some point, the natives on the various islands could have seen the tortoises taken on as provisions.
And this means specifically land tortoises and NOT sea turtles: tradition specifies "Legs like tree-trunks".

Reports of Elephant seals around Hawaii used to be similarly dismissed, but it seems that some of the California ones can stray out that far from satellite tracker reports from radiocarrying seals.
Posted by Jon Downes at 10:28 AM

This posted version has an unfortunate typo: the last line should have read "This means land tortoises and NOT sea turtles"

The message was corrupted in transmission and somehow left that key word out. It had been corrected in a following posting that same day.

The Galapagos Islands are the most incredible living museum of evolutionary changes, with a huge variety of exotic species (birds, land animals, plants) and landscapes not seen anywhere else.