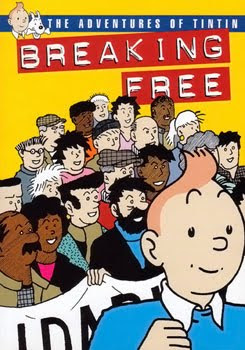 I am basically an old hippy who wanted to run a club for those folk interested in mystery animals, breed tropical fish, write books and tend his garden (or more honestly, watch Graham tend his garden). When I moved here four years ago to look after my father it was with the firm intention of living as reclusive a life as possible and never leaving the village unless I was dragged kicking and screaming to do something that I couldn't avoid.

OK, I exaggerate but basically I intended to run the CFZ and let the rest of the world run itself. I have enough healthy distaste for the mechanisms of modern society to be able to label myself an anarchist, but I am not the sort of anarchist who marches, throws things or stops the city. My anarchism is on a personal and family level.

However, I do have dependents, anim 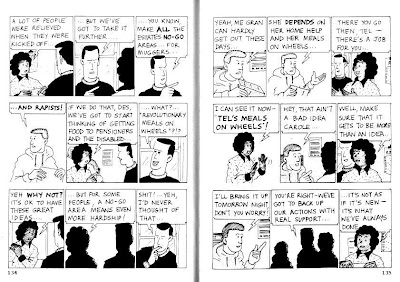 al and human, both within my family and from outside, (and I seem to have a life skill in acquiring them), and in recent weeks, and most notably in recent days, I have been dragged into the real world of doctors, nurses, social workers, age and disability support teams and stuff - a world which I am vaguely familiar with from my days working as a nurse for the mentally handicapped (or whatever they are called these days) a quarter of a century ago.

I hated working with the so-called `caring professions` then, and hate it even more now. I am completely amazed at quite how inefficient and stupid some of these people are!

I thought that the CFZ were inefficient, because we are staffed by unpaid volunteers, more than a few who have physical or mental health problems, but compared with the DSS, the National Health Service, and Social Services - especially those branches with whom I have had to deal in the past week, we deserve the Queen's Award for sodding Industry.

I have been faced with:
And so much more that I really cannot be bothered to repeat it. You get the idea.

And I always remember the shocking standard of treatment that my fcather received during his final illness, both in and out of hospital. Just one incident comes to mind - we had been trying for weeks to get a visiting district nurse to come and sort out a quite important problem, to no avail. However, I was out one afternoon when two nurses turned up, and Graham and Mark assumed they were the ones we had been waiting for. They weren't. They woke the old man up purely to get him to fill in a questionnaire for a survey called `Options for Change` - and then left again.

This is the sort of nonsense we have to deal with every day.

The New Labour `style over content` society has reached ridiculous levels of stupidity: vast amounts of money are spent achieving absolutely nothing. I am not attacking the people on the shop floor. Nurses, doctors and social workers etc. are as good and bad as they ever have been. I have met some wonderful individuals in the last week; individuals who move mountains and cut any administrative corners necessary to do the best for their clients. But I have also met some complete idiots who do nothing and care less, and I have come to realise (OK I always did realise) that we now live in a culture where the dullards, idiots and incompetents flourish, and the freethinkers and bright sparks who actually care, and who have the skills and enthusiasm to actually make a difference are in danger of being swamped beneath a tide of mediocrity and pointless paperwork.

We are rapidly approaching a stage where the services provided by the powers that be for the aged and vulnerable are completely inadequate, and the onus of care is thrown back upon the families, and irritating folk like me who insist on pushing their noses into the social workers' business and causing trouble. Which is why I have a lunchtime meeting with one set of DSS bods, and a housing association, and I am out of bed and working hours earlier than usual, just t0 get the blog done before Graham and I ride out on our steed (ok the Daihatsu) to do battle with the powers that be in aid of an 87-year-old damsel in distress and another one a few years younger.

So at the moment the CFZ is not just the world's largest and (we like to think) best cryptozoological organisation but it is also the Bideford branch of Anarchist Social Services. Weird, huh?

Read `Breaking Free`Online I think you will approve.
Posted by Jon Downes at 8:51 AM

At least you don't have what we have over here. You become a slave to the insurance companies, and you don't leave jobs that you hate because "they pay your insurance." You know why we have so few novelists, poets, and artists here?

The education system certainly does try to make everyone a good industrial worker-- that is if there are industrial jobs around. Creative endeavors are put on the backbone, but once you get out of school, you fight to hold onto a job that has insurance, even if you hate it.

It's too expensive to buy insurance on your own for most people, so virtually no one is brave enough to strike it out on their own. We are ultimately held hostage by having no national health care institutions. We have Medicare for those over 65, and we have Medicaid for the very poor. If you go to an emergency room with no insurance, you will be treated, but because that has to be paid for, it increases the cost for the whole system.

But if you're just "middle class" or poor but make just too much money, you are in trouble. You will never leave a job you hate if has insurance. You just can't leave behind the peace of mind having insurance has. And thus, we're all back to being serfs, subinfeudating ourselves for the sake of security.

Yes, the NHS has problems, but I would give anything to have something like it over here. Contrary to what conservatives over here say, the current health care reforms are nothing like Britain's NHS or Canada's single payer system.

welcome to my world.As you know my daughter has autistic spectrum disorder among other things. I have spent every year of her 25 years fighting for something or other to do with her care. I don't regret a minute of it but how anyone who is frail or ill finds a voice without help is too horrendous to think about. Good luck and if I can help you have my email. I am a dab hand at how to scare the state into action.
*hug*
Lxx