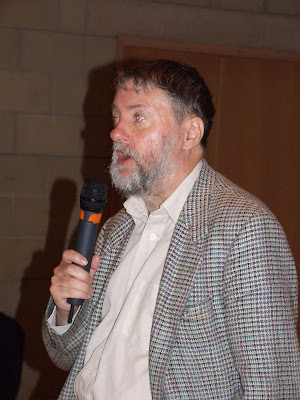 The last day of each Weird Weekend is the day Ronan has his talk. Ronan is the highlight of the weekend for most people and his unique tongue-in-cheek style ensures that as well as being entertained the facts and stories he imparts stay with you longer than most. For example, I doubt I’ll ever forget his tale of the ‘Ting’ from 2008’s Weird Weekend. This year Ronan was talking about Atlantis, something I had believed was a solved mystery. My own view on the subject was that Atlantis had been an exaggerated retelling of the fate of the Minoans when the neighbouring island of Santorini exploded; however, what I had been previously unaware of was that the Minoan civilisation had survived for a good while after the disaster. Ronan had his own conclusions on the matter and you will have to watch the talk on CFZTV when it has been uploaded. And with Jonathan Downes’s key note speech just after Ronan’s talk and the subsequent dinner at the Farmers Arms, so ended the Weird Weekend 2009.

There is a lot of hard work done behind the scenes every Weird Weekend and in the months leading up to it that people don’t get to see and for the past few weeks nobody at the CFZ has been standing still and we really couldn’t have done it without help from other people in the village, right down to speakers and punters that have helped us out too. I’d like to take this opportunity to offer up my own thanks to everyone who has helped us out this weekend. Dr Dan deserves a huge thank you from me in particular. I look forward to seeing everyone who came at next year's event too and to meeting all the people reading the blog over the weekend that have finally been convinced to come to the Weird Weekend in 2010.
Posted by Jon Downes at 9:41 AM

Oll did you manage to find your glasses nothing more annoying and if not I wish you all the luck i can muster finding them.

Yes, I found them the next morning they were exactly where Helios 7 had left them after she tripped me up.