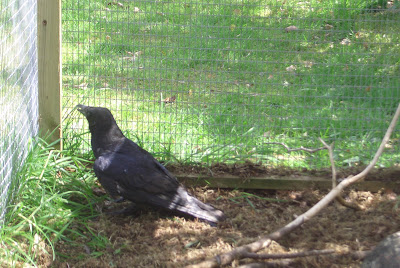 The other week we published a story by Neil Arnold on weird crow behaviour. No sooner than we had done so, but similar things started happening to Nicky R. over in Texas...

Meanwhile, back in the UK, our two crows (OK, a crow and a jackdaw) have settled down. They seem to have some sort of interaction between them (it would be far too anthropomorphic to say that they were friends), and - peculiarly - the visiting crows have stopped visiting since Ichabod Meldrew got a friend (albeit a friend of a different species)....
Posted by Jon Downes at 10:03 AM

Speaking of corvids, check out what rooks can do: