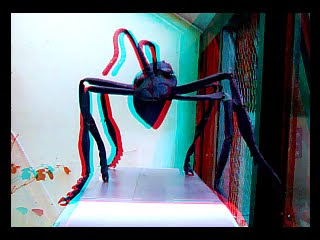 Hello there! It’s Stereoscopic Sunday again! This week’s 3D photo is of a giant ant I found crawling over the fish tanks in the conservatory. Why not pop some red and cyan 3D specs on the nearest random child and use this to scare them half to death and give them nightmares about giant ants for weeks.

Think how useful it’ll be: “Daddy, I don’t want to eat my sprouts; they taste of wee.”

Deer 'fakes death' to escape cheetah and a hyena: video

That’s a story with real bite.

(yes, I stooped low enough to use a piranha/bite pun).