Dale started at IUPUI hoping for a degree in Biology before changing to Anthropology and as a result, has a very diverse background in Geology, Zoology, Paleontology, Anatomy, Archaeology, Psychology, Sociology, Literature, Latin, Popular Culture, Film criticism, Mythology and Folklore, and various individual human cultures especially mentioning those of the Pacific and the Americas. He has a working knowledge of every human fossil find up until his graduation and every important Cryptozoological sighting up to that point. He has been an amateur along on archaeological excavations in Indiana as well as doing some local tracking of Bigfoot there. Now he is on the CFZ bloggo.... 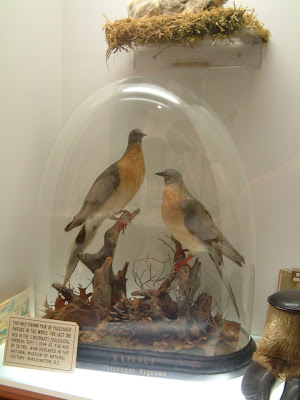 We are living in the core area where the passenger pigeons once lived year-round, the breeding area of their range, and sporadic reports of Passenger pigeons have been made since their supposed extinction, including in Ohio and Kentucky.

What I saw did look exactly like a Passenger pigeon: a large greyish pigeon with a bright salmon-pink front. I saw it feeding on the ground within a few feet, and this morning I saw it fly overhead from below, associating with a large flock of park pigeons but keeping apart from them. Once again the pink belly was distinctive. The noise of the wings when it took off from the ground was also louder than usual when I saw it close up.

What I am assuming is that either Passenger pigeons were conspecific with mourning doves or that they had crossbred in the past and enough genes remain in the gene pool that they can be accidentally recreated by genetic recombination. Either that or they never really became extinct.

very interesting :) thankyou, i didn't know about the large population of them being unusual, i thought they could only reproduce in large mating flocks (probably badly worded , sorry).
fleur

Passenger pigeons were colony breeders, and they needed to be in very high numbers to stimulate reproduced. This is not unusual among doves and pigeons, because it is well-known that domestic pigeons won't lay eggs unless they see another pigeon near them. This can be remedied by adding a mirror to the pigeon's enclosure.

It is possible that mourning doves hybridized with them, and you could get some throwbacks in the mourning dove gene pool.

That said, we do have several species of introduced doves and pigeons (besides the rock dove or common pigeon), many of which don't normally appear in the temperate and cooler parts of the Eastern US. African and Eurasian collared doves do exist in this country. The Eurasian species is established in the Great Plains states and West Coast. Some of them are pinkish, especially the African species, but none are gray in coloration.

We also have other native dove species that might occasionally wander east, like the White-winged dove, which are expanding their range eastward.

Mourning doves do vary in coloration. I've seen those that were really pale in color, and I've seen others that were rather dark.

But I think it's very likely that this bird was a mourning dove that may have some passenger pigeon genes somewhere in its background. I don't know of any genetic studies on these two species, but they may be like wolves and coyotes and natural hybrids might have existed when one species became stressed.

I do know that those scientists who want to clone the passenger pigeon and bring it back are carefully considering the mourning dove as a possible parent species.

It's a very interesting find.

I'd check out the white-winged dove first, though, because they are a bit larger than mourning doves. They also have this lighter color (but they aren't gray on the back).

Here are some potentially related sightings: