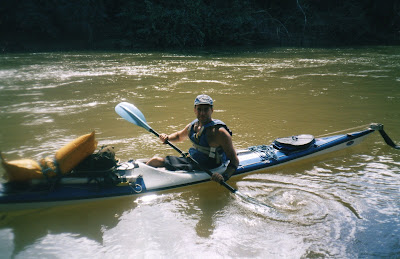 If one good thing has come out of the ongoing saga of the Peruvian giant snake, it is that we have made friends with Andre Issi and if it had not been for all this stuff about Mike and Greg Warner's expedition to Peru, then none of this would ever have happened.

One of Andre's pictures was taken out of context by a Northern Irish newspaper which implied that it was the 40m snake claimed by ther Warners. It was of course no such 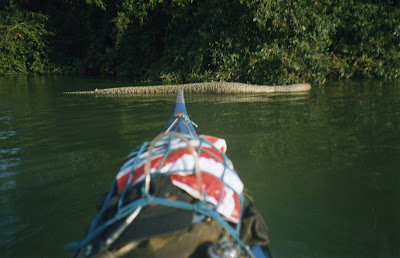 thing and the forces of righteousness, led by Dr Dan, said as much. Unfortunately we all jumped to the conclusion that Andre was the bloke claiming that the snake in the pictures, which, as you can see, is dead (or nearly so) and floating in the water, was the one claimed to be 40m. As Andre writes:

"I was traveling alone by kayak from Brasília to Santa Catarina (state of Brazil) in a long journey along 6000 km crossing Brazil, Uruguay, 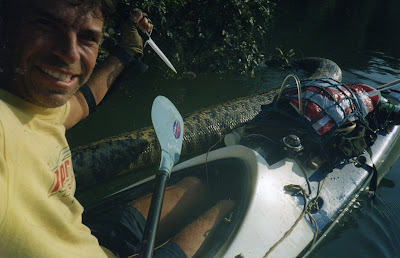 It was so hard and I almost die three times. About a city Guaira (frontier between Brasil and Paraguay) I saw this anaconda floating in the river. I take a lot of pictures and filmed. It has about six meters and his head is under the water arrested in the trees. I had never seen anaconda before and I became very nervous, at the last moment thinking it was alive. 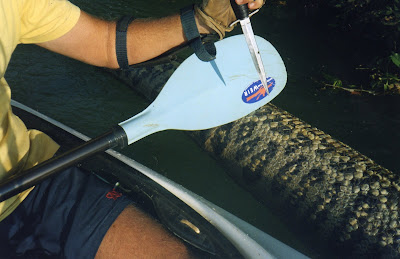 anaconda has about six meters. Only it. I´ll send you another photo beside the anaconda that i take like a joke because it seems like reference to see the real tale of the snake."

As one can see from the pictures, Andre is clearly an OK dude, who is more than averagely intrepid and is possessed of a silly sense of humour; attributes that would make him an ideal member of the CFZ. Dan writes:

"Convey my apologies to Mr Issi (...) I'll buy him all the beer he fancies; he appears to have achieved a rare feat indeed: he 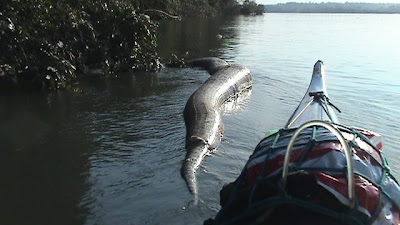 photographed a wild anaconda in its natural habitat without the aid of a team of snake-handlers and he managed to find quite a big one at that. Admittedly, it was dead at the time, which takes a bit of the shine off the achievement but not very much shine;
6m anacondas surely don't die very often and photographing one in the couple of days between death and complete decomposition is quite an achievement (especially seeing as us lot in an overcrowded island have yet to get our hands on even one of the supposedly ubiquitous big cats
that are supposed to be here).

So, apologies to Andre from me and if he's coming to Woolsery at any time, please pre-warn both myself and the landlord of the local pub.... "

And this is the way that disagreements within the Fortean and cryptozoological communities should be managed: like gentlemen, with a handshake and a beer afterwards, and not with endless flame wars and backbiting. There are certain other people within the Crypto community who really should take note of this.

But off my soapbox - over to Andre with a few more pictures.... 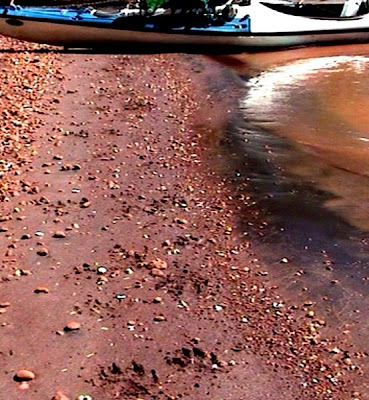 How can I describe eight months about a journey in one page? I can´t send more images while was traveling by the simple fact was in the forest or in the middle of a poor small cities where a computer was difficult access or days and days without cities. I beginning it in the center of south america and ends it in the south coast of Brasil after the kayak schok in my head while I was returning to the coast between big waves of the Atlantic Ocean, like you can see in the photo with a life guard behind me. I almost was arrested in Uruguay because I was alone without a life boat. I must to do a trailer and buy an old bike to cross Uruguay by land 650 km. In Brasil I return to water and go to the north.I never receive any money cause this or try to receive. I only do my travels by adventure. 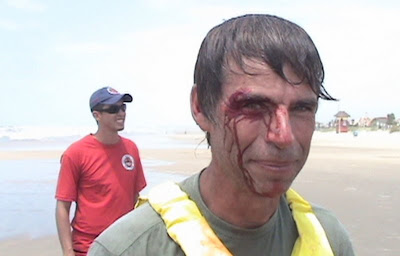 (Above left) Tracks of Jaguars where he slept for the night

(Below Left) Off the Coat of San Catarina

Dude, it is a pleasure to know you and I hope you remain part of the CFZ family for many years to come! 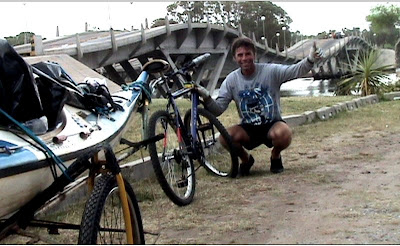 Dear Jon and Dan
Most anacondas died cause they shock against fishnets. I slept in this island where all animals from the Itaipu lake were carried. It was a very, very bad night.
Only in other day fishmans said to me. Maybe a jaguar walk aroud my tend, but go away when I make noise.
I apologise to Mister Dan cause i comment no as good as i would like to say. Well, i´m so tired carring stones to put over this and we agree it´s better drink a beer than it. If you went to Brasil, I´ll invite you and Dan with Danilo Ribeiro from popa.com.br to lunch a barbecue drinking a beer beside the sea. You can see the place who I´m speaking about in this site www.pousadamaktub.com cause here I´m living
While wait for i offer a ¨saluti per tutti¨