NICK REDFERN: Not A Cave-Monster After All 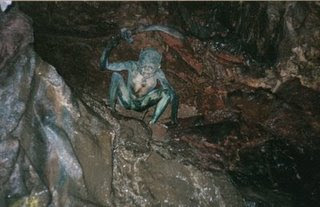 Having read with much interest the recent controversy concerning the so-called Quatari goblin, and the subsequent discussions here and elsewhere concerning various photos of non-cryptids - models, toys and constructs, in reality - being passed off as the real-thing, I'm reminded of this photo which was sent to me around (I think) 1997 or 1998.

Nope, this is no cryptid either. Rather, it's a creation that can be found in a certain, very famous series of caves in England, and which is meant to merely offer a bit of "sword-and-sorcery"-style entertainment to those who visit the caves in question.

But what was interesting was the intricately woven tale that accompanied the picture when it was mailed to me. I forget the precise details now, but it all revolved around the claim that intelligent, sword-wielding cryptids were roaming the many and varied caves that exist deep below the British Isles.

The letter ran to 2 or 3 pages - and was, of course, all complete nonsense. So, if you too have ever been on the receiving end of this photo, just enjoy it for what it is: a piece of man-made entertainment and nothing else!
Posted by Jon Downes at 5:28 PM