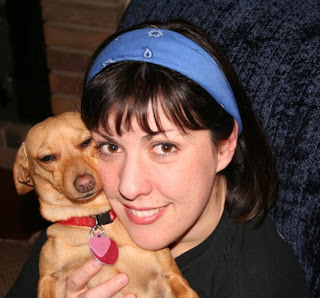 Since moving out to the country here in Central Texas, I have encountered many creatures in places they shouldn’t be – a scorpion in the kitchen, a camel cricket in the tissue box, a gecko under the couch…But nothing prepared me for the large bird hanging out by the porch grill one day. It was a Turkey Vulture. My husband and I were astonished that it didn’t take flight when we approached for a closer look until we noticed that one wing was hanging crooked. It was clearly injured and couldn’t fly. After several unsuccessful phone calls for help, including one to the local game warden, we finally called our priest, Fr. Paul – not for the bird’s last rites, I might add, but because he is a falconer and familiar with birds of prey. He said to feed the bird some meat, and if it was still around the following day, he would come pick it up and take it to Last Chance Forever, a center in San Antonio that rehabilitates birds of prey.

The vulture disappeared before we could feed it, but returned the next day to peer into our living room window. We offered it a r 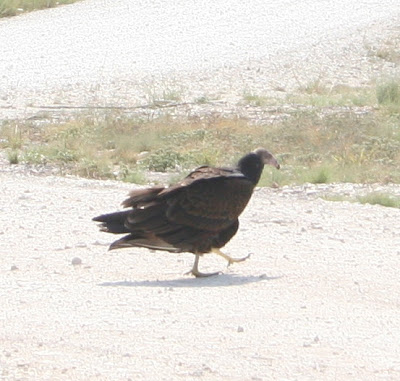 aw chicken breast, which it pinned down with one foot and eagerly devoured. Then it enjoyed an extremely long drink from a plastic bowl in the yard. I wondered how long the poor bird had been walking around searching for food and water. Its hunger had obviously surpassed its fear of humans. I offered some more chicken, but it seemed to have had its fill and disappeared again.

It reappeared the next day, and this time Fr. Paul arrived before it could leave again. My husband, my cousin, Fr. Paul, and I circled the vulture to prevent escape, then Fr. Paul, in two quick strides, grabbed it and even managed to expertly avoid the vomit that it spewed in defense. We were impressed. He took it home where he fed it rabbit – killed by his hawk, no doubt -- then took it to Last Chance Forever the following day.

I regret to say that the bird had to be put down. The break on its wing was an old one, and decay of the bone had already set in. I was heartbroken, my only comfort being that the bird had fallen into loving hands and been well fed before its passing.

Thereafter, I began to notice all the vultures, most of which are Turkey Vultures, in my area. I started researching Turkey Vultures and found fascinating facts to counter the common misperceptions of this much underappreciated bird.

There are two families of vultures: the New World vultures from the family Cathartidea, which inhabit the Americas, and the Old World vultures from the family Accipitridae, which are found in Europe, Asia and Africa. (Many people incorrectly refer to vultures as “buzzards,” a term which properly applies to hawks. This mistake likely originated with the early British Colonists, who had never seen a vulture before coming to the continent.)

Only the New World vultures have a sense of smell, with Turkey Vultures having the keenest. They are attracted to et hyl mercaptan, the gas of decaying meat. However, they prefer fresh meat, and there is a point at which they will consider a carcass too decayed to eat. Turkey Vultures also prefer the meat of herbivores, which is why they will eat a deer before they will touch a dead dog or cat.

While Black Vultures have been known to occasionally kill living prey, Turkey Vultures are non-aggressive. Their defense is their vomit, which contains a partially-digested piece of meat. The smell of the vomit is supposed to deter any predator, and can even distract the predator by serving as an edible offering.

Most people can identify a vulture by its bald head, but may not realize that the baldness prevents the accumulation of bacteria that feathers would otherwise collect from decaying flesh. What little bacteria that does adhere to the head will be destroyed by the sun. Another function of the bald head is thermoregulation, a process which helps control the body temperature.

Any bacteria and disease that a vulture ingests from a carcass will be destroyed in the digestive system. Moreover, its feces functions as a sanitizer for its legs, destroying any bacteria collected from stepping on a carcass. This disease-free feces poses no threat to humans.

Although vultures like to roost in high, open spaces such as radio towers and tall trees, they carve out nests in the soil of the ground or seek the shelter of caves, hollow logs, or old buildings. They lay a maximum of three eggs and raise only one brood a year.

Despite beliefs to the contrary, a circling vulture does not indicate the presence of a carcass; rather, a vulture will circle for hours on currents of air that keep it afloat without having to flap its wings. It may be looking for food or simply soaring at its leisure. When a vulture does spot a carcass, it will descend fairly quickly upon it.

I have found the most fascinating sight in this area to be the vultures congregating in the air. Being a very communal species, they will cluster together and circle lazily overhead by the scores. The sight is awe-inspiring, an unexpected blessing from a creature so often misunderstood and scorned. And while I am so sorry the vulture that showed up at our house could not be saved, I am eternally thankful he sparked my interest so I could discover his amazing species.

The pics are of the vulture that showed up at our house. He was apparently a juvenile, as his head had not yet turned red.
Posted by Jon Downes at 11:34 AM

We do have true buzzards of the genus Buteo in North America. They are just called "hawks," not buzzards.

The most common of these is the red-tailed hawk or "chicken hawk" (Buteo jamaicensis). I don't know why they are called chicken hawks.

The hawks I normally see eating chickens are the Accipter hawks, like the sharp-shinned and the Cooper's hawk.

The red-tails are experts at hunting squirrels through the trees. If the squirrels see them and hide, then hawks screech very loudly as they fly over the trees. They pass by the trees over and over, screeching as they go. The screeching will usually unnerve the squirrels and have them run out. In which case, the hawks quickly swoop down upon them.