MONTAUK MONSTER II: And this one has a Penis 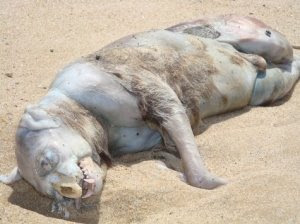 Last summer the fortean world was shocked by the advent of a strange naked, bloated corpse on a beach near the Montauk business district of New York. It became known as `The Montauk Monster` and for some reason that completely escapes me, provoked an almost unparallelled Internet feeding frenzy. Richard and I took a quick look at it, identified it as a badly decomposed small carnivore, and promptly forgot about it. We didn't even bother to include it in Animals & Men.

This, as it turned out, was a bad move. Dr Daz, who correctly identified it as a genetic mutant lifeform back engineered from material recovered from the Roswell crash - no, sorry, as a decomposing racoon had a staggering 50,000 hits a day on TetZoo, and other internet crypto pundis were equally popular. Muggins here just totally ignored it and wen on with organising the Weird Weekend.

However, it has happened again, and this time with a twist: the external genitals of the unfortunate creature are clearly visible, and you don't know how difficult it is not to be crude at this point, especially as - like the rest of the creature - they are swollen by putrefaction. There are a dozen Alien Sex Fiend jokes jus itching to come out, but we have a family
audience, and I must resist temptation. Thank God Freeman's not here.

Retrieverman over in West Virginia has one of my favourite blogs of the moment, and I will leave it to him to carry on the story, more tastefully than I...

You've made a mistake: the photo you show here (the one with the visible penis) is Montauk # 1 (just one of the less familiar images). The only released photos of Montauk # 2 show it lying on its belly.

And when are going to stop calling me Dr Daz? Please stop.