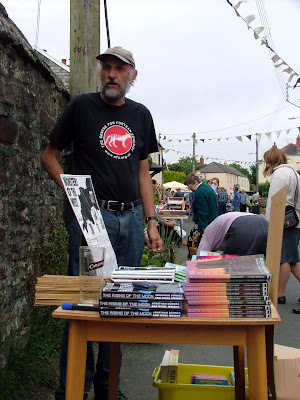 The
“Big three”
Choices of a
Lesser-known English
Ufologist

Ok!..So I “borrowed” some of the title of this blog from the famous film “educating Rita”, but I just love that film!...Whoops this is supposed to be a blog about crypto-creatures, not a film review, but it sounded cool anyway!. Right. Down to work!..

UK Bigfoot... Why? Because the very idea of huge, hairy creatures, running amok in the peaceful English countryside, scarring old ladies as they eat their cream teas, seems very amusing to me, in a sort of perverted way. But on a more serious note, these mysterious creatures, if they exist, in the physical sense, may just go on to prove a long-held theory of mine. That there might exist a form of “window” or “vortex” in inter-dimensional space, through which these and other types of paranormal objects materialize. I consider the possibility of these creatures being able to have existed in our UK countryside, undiscovered for thousands of years, as being totally preposterous! So, the only other explanation possible is that they “come” from another place, or time.

The Owlman. Now the reason that this creature fascinates me is easy to answer! It was the first “crypto” creature that I was introduced to, courtesy of Jon. We all had a marvelous time, a few years ago, filming a short film, with members of the CFZ posse. The memories of that summer will be with me for the rest of my life, and it led to a fantastic time, which I had with Jon and the gang, for my years afterwards. Happy days! Thanks Jon my old mate!!!

As a ufologist, you might expect this of me!. It is the “Grays” that UFO contactees often report meeting aboard these mysterious craft, that prowl in our night-time skies. I judge these creatures as counting as “crypto” others may disagree I suppose, fair enough!.

So, there you are. My selection may show all just what a narrow mind I posses, but, considering that I had very little knowledge of animals and no knowledge whatsoever in “crypto” subjects before I met Jon and the rest of the CFZ, I consider myself very lucky to have been educated in such a fascinating way!