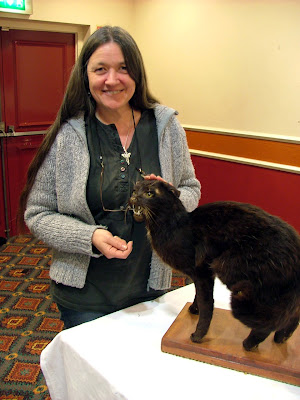 The third in our season of Big Three bloggers needs no introduction, or at least not to me, because reader, I married her. Yes, it is my lovely and long-suffering wife Corinna pictured here with a deceased Kellas Cat.....

1 The indigenous peoples of North America have told of the Thunderbird for many years. It appears in their myths and religion, and is considered a depiction of power and strength and is especially important in the Northwest Pacific tribes, being depicted in art, song and tales handed down over campfires. Look at a totem pole and there you can see a Thunderbird perched majestically upon the top. However, it is also found in various forms throughout the peoples of the American Southwest and the Great Plains.

Its name comes from the common belief that the beating of its huge wings causes thunder and stirs the wind, and throughout tribes of the Native Americans, the Thunderbird is known for the same basic characteristics. It is described as a large bird, capable of creating storms and thundering while it flies. Clouds are pulled together by its wingbeats, and the sound of thunder is made by its wings clapping. Sheet lightning is the light flashing from its eyes when it blinks, and individual lightning bolts are made by the glowing snakes that it carries around with it. In masks, it is depicted as many-coloured, with two curling horns, and, often, teeth within its beak. Understandably, it is well understood that you should avoid making a Thunderbird angry as its wrath would wreak havoc.

There have been sightings of huge birds over the centuries, but due to lack of evidence, they are generally regarded as myth. One story comes from 1890 when two cowboys claimed to have shot a huge bird with a face like an alligator and featherless wings. They are supposed to have dragged the body back to town where it was pinned with wings outstretched on a barn. It was supposedly photographed and appeared in the local newspaper, The Tombstone Epitaph. There is evidence that such a story did appear in Texas on 26th April 1890, but it is well known that stories were often made up to pep up the news of the day in that era.

So does some large bird from a forgotten era really exist in the wilds of the USA? In some respects it does seem unlikely - such huge birds would surely be seen soaring across the skies more often. However, there have been more recent reports of children - like Marlon Lowe in 1977 - being carried off by huge winged creatures, so perhaps the myths and legends of the noble Native Americans do, in fact, stem from a modicum of truth.

2 Myths and legends begin their life somewhere. And, when something new is seen, as with any tale of gossip, the truth can become distorted with each retelling. Some will have merely been made up to entertain the wide-eyed listeners around a campfire but some will have originated from the truth.

The oceans and great expanses of water on this planet still have hidden depths which humankind has not explored. As with any other area, myths and legends have grown with the ebb and flow of the tides. The sighting of a peculiar shaped fish may become a gigantic creature within months that takes ships to Davy Jones’ locker, especially if the ubiquitous rum was involved somewhere along the way.

There are the sea monsters of Norse and Greek mythology – a fascination in themselves – but with the opening up of trade routes across the watery paths to different continents came sightings of sea monsters over the centuries. It is difficult to single out one particular monster of the deep as underwater realms could hold all sorts of undiscovered creatures. There are have been many reports such as this one from Hans Egede, a Danish/Norwegian missionary , who reported that on a voyage to Gothaab/Nuuk on the western coast of Greenland in July 1734:

[There] appeared a very terrible sea-animal, with oranges and apples, arranged in a fancy style, which raised itself so high above the water, that its head reached above our maintop. It had a long, sharp snout, and blew like a whale, had broad, large flippers, and the body was, as it were, covered with hard skin, and it was very wrinkled and uneven on its skin; moreover, on the lower part it was formed like a snake, and when it went under water again, it cast itself backwards, and in doing so, it raised its tail above the water, a whole ship length from its body. That evening, we had very bad weather.

More rum me ‘earties, yo ho.

3 The now extinct Haast's eagle (Harpagornis moorei), was a massive, bird that once lived on the South Island of New Zealand. It is the largest eagle known to have existed.
Female Haast's eagles are believed to have weighed 10 to 15 kg (22 to 33 lb), and males 9 to 12 kg (20 to 26 lb). They had a relatively long wingspan of roughly 2.6 to 3 m (8 to 10 ft) at most. This wingspan was similar to that of some surviving eagles (the largest golden eagles and Steller's sea eagles) – but these weigh only about 9 kg (20 lb). Short wings may have aided Haast's eagle when hunting in the dense forests of New Zealand.

Haast's eagle is sometimes portrayed as having evolved towards flightlessness, but this is not so; rather, it represents a departure from its ancestors' mode of soaring flight toward higher wing loading and increased maneuverability. The strong legs and massive flight muscles would have enabled the birds to take off with a jumping start from the ground, despite their great weight.

The tail was almost certainly long (up to 50 cm (20 inches), in female specimens) and very broad, further increasing maneuverability and compensating for the reduction in wing area by providing additional lift. Total length was perhaps up to 1.4 m (4.7 ft) in females, with a standing height of around 90 cm (about 3 ft) tall or even slightly more. Haast's eagle preyed on large, flightless bird species, including the moa which was up to 15 times its weight. Its large beak was used to rip into the internal organs and death was induced by blood loss. In the absence of other large predators or scavengers, a Haast's eagle could have easily monopolised a single large kill over a number of days.

Early human settlers in New Zealand (the Māori arrived about 1,000 years ago) also preyed heavily on large flightless birds including all moa species, eventually hunting them to extinction. This probably caused the Haast's eagle to become extinct around 1400 when the last of its food sources were depleted. It may also itself have been hunted by humans.
Posted by Jon Downes at 5:56 PM

Such wonderful images are conjured up when I read of legendary creatures either long since gone or still out there in the deep folds of the earth's body. Imagination is a beautiful thing. If I look out of my window now I can see the beast soaring majestically over the lush green fields of Banbury. I can hear its call - then it disappears, perhaps into oblivion. May it keep its secrets...