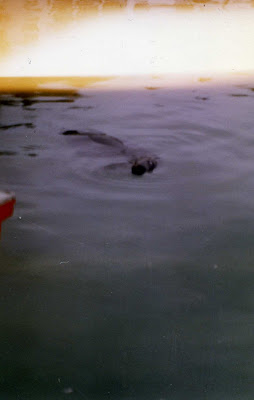 Oll (Gawd bless 'im) has just found a photograph that I had thought was lost forever. It was originally supposed to appear in The Owlman and Others to illustrate the following passage:
Playing ‘Yin’ to the ‘Yang’ provided by Morgawr was ‘Beaky’ the Dolphin. He was generally regarded as somewhat of a pet by local people. A local witch called Miranda, who has been invaluable in my researches into evetything connected with this (and the) case, told me that he could often be seen in the enclosed harbour beneath the Chain Locker pub on the waterfront where he would perform in the water and live royally on scraps of food thrown to him by locals and tourists alike.

By the time we got to Falmouth 20 years later, ‘Beaky’ was long gone and the only animal inhabitant of the tiny harbour was a large and rather moth eaten looking seal, with one eye, who was obviously filling the same ecological niche that ‘Beaky’ had filled twenty years before, by lolling on the surface and begging for scraps of cheese sandwiches from the occupants of a small pleasure cruiser tied up to the harbour wall.
Posted by Jon Downes at 5:48 PM