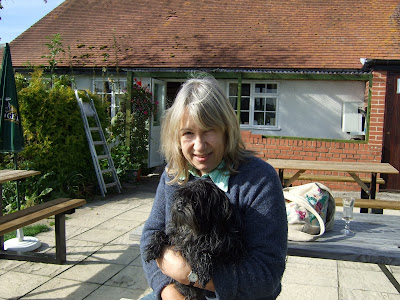 It is always a pleasure to welcome a new guest blogger, but this is a special pleasure, because it is the first time that we have had two generations of guest bloggers in the same family. Georgina, who was pivotally involved in the Loch Ness Investigation Bureau during the glory years, is also the mother of bloggo regular Fleur Fulcher.....

Foxes are classified as vermin, they can be legally shot. They steal and eat poultry on a comparatively small scale and occasionally take a weak new born lamb. The cost of their actions to the national economy is negligible.They keep down the rabbit, rat and mouse population and by and large do not seem to upset the natural order.

Badgers are protected, they cannot be interfered with in any way without a permit. They transmit bovine tb. The estimated cost of bovine tb to the economy in the year 2003/04 was £89 million, in compensation to farmers, research etc. Not all of this cost can be laid at the door of the national badger set, but a great deal can . The last official badger population survey was in 1997, when it was estimated that badgers had increased by 77% in the previous decade. Current evidence suggests that this increase has continued. There doesn't seem to be an agreed position as to why this should be, although a farmer friend of mine thinks it is partly due to the increased planting of maize. These tall crops allow badgers to travel along new corridors and also give them an additional food supply well into the autumn.

I live in Mid-Devon, I have a large garden and live across the road from farm and woodland. I could take you out almost any night of the year apart from deepest winter and find you a badger, most nights they go through my garden. Several times a year I have to ring the council to get them to take away a dead badger from the road outside.

I suspect that a great many supposed fox predations of poultry are actually down to badgers, although Mr. Reynard is of course the main offender Until I moved here I had no idea that badgers took as many if not more chickens in some areas, than foxes. Unlike foxes, badgers will tear their way into timber chicken houses and if cornered they can be very unpleasant. My nextdoor neighbour, who incidentally happens to be a local Lib-Dem councillor cornered one in his dressing gown at 3am, (the badger of course being in the garden not in the dressing gown).

Now I come to my real gripe. I have lived in Surrey, Hampshire, Somerset, and Dorset . In all these places I have been visited in my garden by my favourite animal the hedgehog and also sadly seen many of them dead on the road. I moved to Mid- Devon nineteen years ago, during that period I have never seen a live hedgehog. I have see a couple dead on the road and saddest of all found one that had been predated by a badger in my garden .

Having done a bit of research before writing this to ensure that I had my facts correct, I am horrified to learn that badgers are not only wiping out the hedgehogs, but are endangering bumblebees and ground nesting birds.

Now I would hate to live in this country without badgers, but would someone explain to me why badgers are protected and foxes considered vermin.
Posted by Jon Downes at 5:29 PM

What a fab article. I have no idea why protecting badgers is seen as so important. More please from this new and Bonza Blogger.....