RICHARD FREEMAN: The Case of the British Thylacine 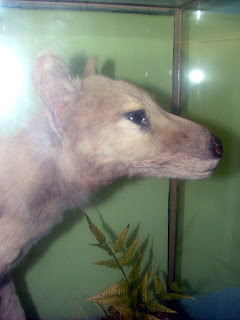 Once again, we were pootling through the CFZ Picture Archive, when we found these two images of a slightly moth-eaten stuffed thylacine in Kendal Museum. This reminded Richard of the intriguing story of another Lakelands Thylacine...
In the spring of 1810, a bizarre series of livestock killings began. Over the next six months, a mystery predator cut a bloody swathe through Cumberland. This creature was never identified, but became known as the Girt Dog of Ennerdale. Though often quoted, this chapter In British animal mysteries is one of the most cryptic and obscure. On re-reading the tales recently, I found a strange thread that no-one (to my knowledge) has picked up on before. The saga of the Girt Dog may be even odder than anyone has ever realised: and the 'Dog' itself may be a doubly Fortean beast.
The tale began when the corpse of a half eaten ewe was discovered on the fells above Ennerdale 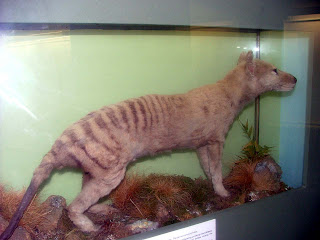 Water. The victim was soon followed by others, as the culprit killed evey night. Farmers and shepherds patrolled the hills, but the creature remained unseen.
Such was the quantity and ferocity of the attacks; that natural predators, like foxes, were discounted. As local farmers became worried, posses of men and dogs scoured the area. But the beast evaded them. It never attacked the same flock on consecutive nights. Its uncanny elusiveness caused superstitious ramblings among the villagers. More fuel was added to this growing fire when the beast began to show some disturbing eating habits. Many carcasses were left mostly uneaten, but the blood had been drained from their wounds, as a vampire would do.
Finally, someone caught a glimpse of the creature. A shepherd watching his flock at dawn saw the killer, but its description brought even more confusion. It was like a tawny-coloured dog, with dark, tiger stripes. quite unlike anything he had ever seen before.

The Dalesfolk argued over the identity of this strange beast: as to whether it was a wolf, or a lion, or a tiger? Some even believed it to be a supernatural entity, touting its love of blood as 'proof'. Around this time the name 'Girt Dog' was coined. Another queer attribute of the 'Girt Dog' was its effect on normal dogs. Fell sheepdogs would cower in its proximity, and refuse to follow its spoor. More proof of its diabolical nature, whispered the locals. Hunting dogs were brought in to replace the sheepdogs and a pack was collected to hunt down the killer. After days of hunting, the pack finally tracked down the 'Girt Dog' and forced it to break cover. It tried to run. but the hounds soon caught up with it. the 'Girt Dog' turned on its pursuers with unbelievable savagery, killing several hounds swiftly. The rest at the pack scattered in terror and the monster escaped. Obviously no normal dog could have caused such a bloody rout.

The farmers changed tactics and littered the hillsides with poisoned sheep cadavers. The'Girt Dog', however, disdained carrion, preferring to rend and slay amidst the living flocks. As the bodycount rose, rewards were offered for anyone who could end this reign of terror. Once a group of armed men had the beast encircled. The creature charged at one of the men, who lost his nerve and threw himself aside. Unfortunately. an elderly man, Jack Wilson, who was also quite deaf, was collecting firewood close by. The 'Girt Dog' ran straight through his legs and bowled him over. Jack swore that it was more like a girt lion than a girt dog.

Professional huntsmen were called in. but had no more luck. The 'Girt Dog' led many on a wild goose chase. Up to 100 mounted men with packs of dogs failed to catch it. Finally. on September l3th 1810, the 'Girt Dog' was surrounded and shot. Incredibly it escaped despite its wound and ran towards the River Ehen. Here it was found cooling its injury and ran once more to Eskat (Eskett) Wood. where it made its last stand. Flushed from cover, mortally wounded, the huntsmen's dogs closed in and tore it to shreds.

What little was left of the bizarre predator was sent to Keswick Museum, and mounted as a specimen. Sadly, Keswick Museum closed in 1876 and no record was kept of what happened to the exhibits. So ends this weird tale. What are we to make of it? well, we have some intriguing clues.

The 'Girt Dog' displayed some characteristics which were very unlike any dog. All the witnesses described it as being striped. There are no striped dogs, but this animal must have sufficiently resembled a dog to have been given the name 'Girt Dog'. The animal drank its victim's blood, while often leaving the flesh untouched. All canids eat the meat of their prey. It terrified ordinary dogs, and easily killed hunting dogs, even when outnumbered.

Only one animal could account for these descriptions - the Thylacine. The striped coat and blood drinking behaviour of the marsupial wolf is well known. Tasmanian hunters described how it could bite through a dogs skull with ease and Sir Richard Owen described it as "the most fell beast of prey". This hypothesis may seem fantastic at first, but let us examine some facts.

The thylacine did not suffer from serious persecution until the 1860s. In 1810, it was still a common animal. In Tasmania, where many were kept in captivity, there were no laws governing zoos at the time and although there were only a few sedentary zoos in Britain in the 1800s; there were many travelling zoos. These appalling institutions consisted of caged animals being carted around Britain by horse-drawn carriage. This must have been a terrible ordeal for both the exhibits and the horses.

Perhaps the best known of these was the infamous Wonbwell's Travelling Menagerie. As well as the stock-in-trade such as bears, lions, tigers and monkeys; Wonbwell's also exhibited rarer animals, such as snow leopards. It is even thought that they possessed a gorilla, without even knowing it! Apparently mis-labelled as a chimp. It would have been the first gorilla in Britain, (gorillas were as unknown as yetis until the 1840s). Zoological accuracy was not a high priority in these establishments. It is not out of the question that a travelling zoo had thylacines in its collection, and that one of them had escaped in the Lake District in 1810. Remember there was no television or radio then and many people were illiterate, especially in the countryside. Most people knew nothing of natural history beyond their own country, hence the confusion the 'Girt Dog' caused.

Enquiries at the new Keswick Museum drew a blank. As did those at other Lake District museums, Libraries and Historic Societies. No records of the whereabouts of the stuffed specimens were kept. One hopes that the museums stock was sold on, rather than just thrown away.

Very little of the 'Girt Dog' would remain now, but it isn't beyond all hope that somewhere, in some dusty basement or attic, is still a skull labelled 'wolf' or 'dog', which has too many incisors and opens far too wide to be either species.