RETURN OF THE SHUG MONKEY 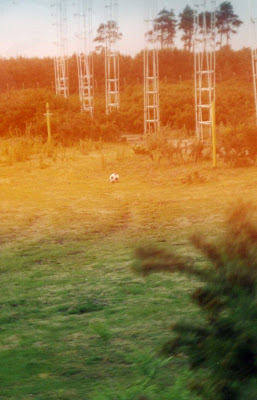 There is a bear in Rendlesham Forest, or so says The East Anglian Daily Times.

"At least three people claim to have seen the grizzly beasts in the forest within the last week, although bears are not native to Britain. [...]

One of those who saw the creature is Jenny Pearce who said: "I was on the green at Rendlesham Forest having a picnic with my three-year-old son and his friend's family. After the picnic we stayed to play and explore the woods. While we were in the forest I saw a large animal moving through the trees ahead. i thought it was a big dog, so I picked up my son because he has never really got into dogs and gets easily scared. But as it continued away from us it was clearly not a dog. It was much bigger and there wasn't anyone there to be walking it if it was a large dog."

It will not surprise anyone to hear that I have been to Rendlesham Forest on a number of occasions. Anyone who went to the 2002, 2006 or 2007 Weird Weekends will know that Larry Warren, probably the most famous UFO contactee in modern Britain is a personal friend of mine and so is his erstwhile partner in crime Peter Robbins. And nearly anyone who has more than a passing interest in the subject will know that Larry was once a USAF Sergeant at the long defunt Air Base at Bentwaters, where in 1980 the most famous British UFO case of all time took place.

But that's not what interests me most about Rendlesham.

The area between Orford Ness and Rendlesham Forest in Suffolk is a very strange place. As well as being one of the most eastern points in the British Isles it has also been the focus for a wide range of bizarre paranormal activity. Writing in the 13th Century, Ralph of Coggeshall, described a "wild man" caught in fishing nets off Orford Castle. This creature who like so many contemporary sightings of humanoids seen in conjunction with UFOs was seemingly equally at home on land and at sea, lived at the castle for several months. The wild man is not the only item of cryptozoological interest from the Rendlesham area. The lanes of the area are reputedly haunted by giant spectral black dogs (like the one seen by Lady Rendlesham in Leiston Churchyard at the end of the nineteenth century), that pad malevolently but silently along. An even more disturbing spectre called the shug monkey, which is described by witnesses as an unholy combination of mastiff and great ape is also seen on occasion, and in recent years the forest has also been the haunt of mysterious black ‘panthers’.

An ex-girlfriend of mine - an East Anglian paranormal researcher - was in possession of some video tape which showed the paw print of some huge animal - like that of a cat or a dog, but far bigger and with strange flattened finger nails rather than claws. She thought that it was a print from an alien big cat of some description, but my immediate thought was of the semi-mystical ‘shug monkey’. When I later found that my friend and colleague Jan Scarff who was brought up in the vicinity of the air bases also knew about the so-called ‘shug-monkey’ I became even more interested, and I have been collecting reports for some years. Nick Redfern also writes about the shug monkey in Three Men seeking Monsters and between us we have built up a convincing image of a large, dark coloured shambling beast which is presumably zooform in nature.

So, did Jenny Pearce see a bear? I suppose it is a possibility. Bears have been reported in the UK over the years; in the most recent edition of Animals & Men writes about London `Bear Scares`. Bears have escaped from captivity and lived wild in the UK before now. One was reported for some years from the Wychwood in Oxfordshire. But as the legislation surrounding private animal keepers is tightened up, the chances of bears being released from captivity into the wilds of Suffolk recedes. There is always the ever present spectre of `canned hunting` - a barbaric and completely vile practrise whereby animals are realeased into the wild purely so some moron with a gun can shoot them for a trophy, but despite claims over the years, no concrete evidence has ever been presented to us for bears being used for this horrid purpose in the UK.

One researcher who shall remain nameless claimed to me about ten years ago that so many bears had been released into parts of mid Wales that there were "organised bear hunts" held every weekend. But he was an idiot, and I will not dignify his ridiculous claims by discussing them further.

No, I have a gut feeling that the creature that has been reported on three occasions in the last week is something far less tangible, and far less easy to catch. It is, I strongly suspect, the return of the shug monkey, some ten years after its last spate of appearances. I wonder what else may be about to make a comeback.

The game is afoot.

The picture, by the way, is of part of Bentwaters Air Force Base (now demolished) which was taken by me in 1997, and exposed all wrong. However, I have always liked the spookiness of it and waited for a chance to use it..

I’ve long been fascinated by those weird events from Rendlesham Forest, and I very much enjoyed reading Larry and Peter’s “Left at East Gate” book about the UFO event. But, regarding the bear ……… as I commented on the news story at Cryptozoology Online Daily, I’ll post the same remark here.

It seems probable that these bear sightings have been a hoax: