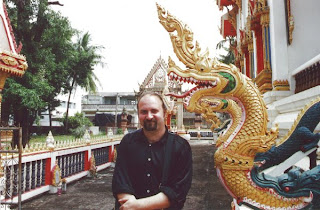 Back in the year of the dragon, 2000, I was in Thailand on the track of the giant crested serpent known as the naga. In Thai legend there is also a birdman known as a guruda and the singa, a golden lion. It struck my how much these seemed like legends from Cornwall with Morgaw the sea serpent, the Owlman and the phantom big cats.

In 2003 and 2004 I was in Sumatra searching for the orang-pendek, a short, hairy, man-like ape. In the same jungles were stories of giant horned snakes and the cigau, a possible scimitar toothed cat.

In 2007 on the grasslands of Guyana we heard of monster snakes and a race of red-faced pygmies as well as a disease spreading, child-killing goblin.

All around the world it seems very specific kinds of monster archetype are seen again and again in every culture. Each civilization will have combinations of these monsters in its culture. I call this the Global Monster Template. The categories are as follows.

Now lets take a closer look at these categories. They all have one thing in common. They each have an analogue on the plains of East Africa several million years ago.
Our Australopithecine ancestors on the plains of East Africa had a struggle to survive. Our ancestors were being preyed upon by, and were in competition with, various formidable creatures. Crocodiles and pythons ate them as did big cats, hunting dogs, and large birds of prey such as eagles. They competed against other primates such as giant baboons and other races of hominids, some larger than them and some smaller.
All of these creatures can be slotted nicely into the universal monster template. There seems to be groups of monsters reported all around the world in every culture. These archetypes include dragons, giants, little people, monster birds, mystery big cats, and monstrous dogs. All of them have a direct link back to our ancestral horrors.
Coincidence? I think not.
Perhaps some of these monsters are escapees from the psychic zoo, a massive, collective, sub-conscious, thought form. The thought form or tulpa is said to be a 3-D semi solid image created by the power of the mind. Buddhist lamas in Tibet are said to be able to summon up tulpas during intense meditation. Western explorer Dame Alexandra David Kneel was said to have created a tulpa of a monk whilst studying in Tibet. Polish medium Franek Klusk was said to have summoned up huge cats, birds, and even ape-men during séances. Perhaps, considering the types of beast he called up, he was creating tulpas from the global monster template.
If individuals can create tulpas, imagine what the collective, gestalt mind of humanity as a species could do. Perhaps some are a giant worldwide thought forms emanating from our innermost fears.
How might this work? Perhaps in certain "window areas" something affects the minds of those who enter. The mind is an electro-chemical computer, perhaps when "scrambled" it must "reboot" like any other computer. When in this primeval state perhaps the mind raises the prehistoric terrors of our past, and raises monsters. This is not to deny that there are flesh and blood counterparts for each of the monster categories, there almost certainly are. But when these things manifest in places that could not support a "real" creature maybe we should look to thought forms for answers.