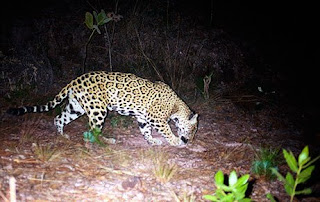 So, what exactly is the status of Jaguars in northern Mexico and the southern United States? In the past few weeks there have been a couple of news stories about this beautiful beast.

First of all The National Geographic website carried this story:
February 11, 2009—The largest cat in the Americas is alive and well in the heart of Mexico, scientists say. Three photographs of a male jaguar and exactly 132 poop samples (including the one above, released February 10) are the first known evidence of the predator since the early 1900s. The big cat was snapped by a camera trap in the Sierra Nanchititla Natural Reserve.

I really wish that scientists wouldn't use the word 'poop'. I understand that the words `shit` and `crap` have become swearwords in some echelons of society, but there are still perfectly socially-acceptable synonyms for the process and product of defecation, such as `droppings`, `dung`, or `scat`. However this is just a pet niggle of mine and I digress. Back to the jaguars:

Sierra Nanchititla Natural Reserve is in the south of Estado Mexico, (the State of Mexico), a Mexican state in the central south of the country. Confused? So am I. I will now refer you to Wikipedia, an institution which, though flawed, has its uses.

The State of Mexico is (as the name implies) a state in the middle of Mexico but, again according to Wikipedia , slap bang in the middle of known Jaguar territory. However, the park's website whilst being understandably proud of the presence of jaguars despite the original story (see above) having been splashed all over the world's press. 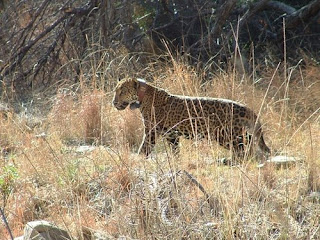 Take a look at THIS picture. Yup, its another jaguar. And, yup, it is wearing a collar somewhat reminiscnet of that worn by a racing greyhound here in the UK. Does that mean that the CFZ have discovered an illegal jaguar racing cartel? No, of course not.

I will refer you to an article in the L A Times last week which reads:

"A jaguar was captured southwest of Tucson this week during an Arizona Game and Fish Department research study. The study was actually aimed at monitoring black bear and mountain lion habitats.The male cat has been fitted with a satellite tracking collar and released. The collar will provide biologists with location updates every few hours and it is hopeful that this data will provide information on a little-studied population segment of this species. This is the first time in the U.S. that a jaguar has been able to be followed in this manner."

Well, bloody hell that's good news isn't it? You cannae argue with a live jaguar Captain! However, other newspapers and internet commentators have implied that ths evcidence is unique. Well, it is and it isn't. 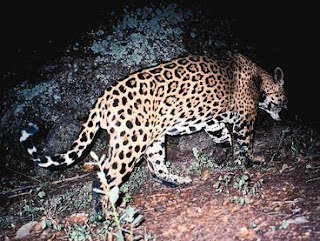 This picture was taken, also outside Tucson, back in 2004, and was accompanied in the original article in the Arizona Daily Star with these quotes:

"This is the most jaguars that have been seen at one time, in one area, since the early 20th century," said Michael Robinson of the Center for Biological Diversity. "It's certain that at least one jaguar has been able to make a living in Southern Arizona since 2001", said Bill Van Pelt, head of the Game and Fish Department's non-game mammals program. "But a true population would have yielded more photos, and there still is no evidence of female jaguars north of the border", he said.

"When I hear the word 'population,' that implies a breeding population where they're self-sustaining," Van Pelt said. "Until we've documented there are females, we just have dispersing individuals."

Right on Mr Van Pelt (although that is an unfortunate name when one is dealing with the conservation of an animal which has been hunted widely for its coat). But nothing seems to have changed in the last five years. Despite claims in the cryptozoological community that expeditions should be sent out to prove that jaguars were not hunted to extinction in Arizona 110 years ago, there is no evidence that anything untoward has happened. Jaguars are known to live in Central Mexico in the Sierra Nevada which is less than 200 miles south of Arizona. Young male jaguars are regularly wandering from there into the southern United States. Hopefully the Mexico-United States Barrier will not do too much to stop this happening in the future.

What will be really cool will be when a female jaguar crosses the border, and then we can all get excited at the prospect of jaguars returning to the United States as breeding natives for the first time since 1900.