Most people think that the Loch Ness creature was first seen in 1933 with the building of the new road. As you can see from the list below, ignoring the oft reported story of St Columba in 565, there have been sightings since 1527. 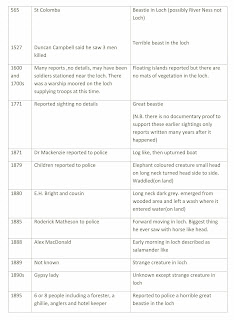 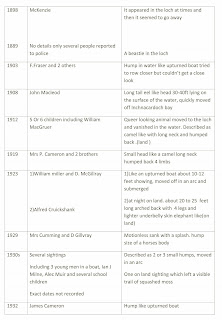 Animals been seen in the Loch for centuries. As it surely can’t be the same creatureif it is an unknown animal, there must have been a breeding colony to continue to be seen over the years. It has always been said that the Loch doesn’t connect to the sea and therefore no large creatures could have come that way to breed. There is new evidence to say that this isn’t true.

British and U.S. scientists claim they have evidence that the sea extended into Loch Ness at two points in history: after the Ice Age in Europe (125,000 years ago) and 12,800 years ago. A geologist working with a research team in 2001 noticed the clay on the anchor of their boat looked different from other deposits found in the same part of the Loch. Carbon dating and amino-acid testing on the clay indicated that it contained clams and sea urchin spines from both 12,800 and 125,000 years ago. This discovery would tend to lend credence to the theory that large animals could have become trapped in the Loch as the water receded back to the sea. Source: The Press and Journal (North Scotland). Food for thought indeed.