GLEN VAUDREY: Where have all the sea-serpents gone? 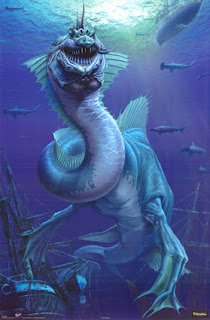 During the nineteenth century the Western Isles of Scotland would on average have sightings of a sea serpent every twenty years. They would range from the great sinuous many humped type to the merhorse and long necked sea serpent. These sightings would continue at the same frequency all the way up to the end of the First World War and then they appear to have upped flippers and headed off somewhere else.

It would be in the late 1950s before these waters would once more see a mystery sea creature, on that occasion a giant turtle would be seen swimming in the waters between Soay and Skye. Impressive as a giant turtle is it is not a sea serpent.
So where have they all gone? It would be extremely sad to think that some of the great mystery animals of the deep have become extinct before they can be positively identified but it is quite possible that that could be the case in this instance.

But perhaps there are other less extreme reasons than extinction to explain their absence from these waters, before we give up the search let’s consider some possible explanations for the recent dearth of sightings. The first thing to consider is the effect technology has had on sea vessels, they have not only got bigger they have got louder, and despite the much larger size of the ships there are perversely less crew members needed to man them and therefore less people to look out across the waves. Add to that ships rarely drift out of the shipping lanes and into unexpected sea serpent-infested waters. So perhaps the sea serpent prefers the quieter waters where it can have no fear of being run down by a passing cargo ship as it happily basks on the surface.

But then again the reason for the sea serpent’s absence may have more to do with fish stocks. In the early part of the twentieth century the herring stocks in these waters collapsed, gone for good were the days when the local harbours would be full to bursting with fishing boats, today you would be lucky to find more than a handful. So perhaps this lack of fish is the cause that drove the sea serpents away, if so perhaps one day if the fish stocks improve we may once again see the return of sea serpents to the Western Isles.
Posted by Jon Downes at 9:32 PM