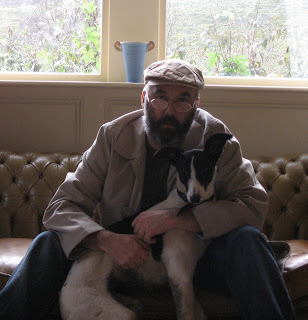 One of my favourite guest blogs over the last few weeks has been Colin Higgins from Yorkshire, who - incidentally - was the winner of the compy in last month's `On the Track`.

His article on the burbot re-awakened lots of memories of my grandmother (who was a great fisherwoman, as the record breaking chub in the glass case in the CFZ Dining Room bears testament) telling me about this strange fish she had caught in Cambridgeshire in the 1920s.

He emailed me the other day and was full of thanks because I had posted his article. "Dude, it is me who should be doing the thanking" I wrote, "I enjoyed your article immensely. I don't suppose you could do any more for us?" To my great pleasure he did..
In his book on railway weirdness Crossing the Line the folklorist Paul Screeton makes the following observation on the subject of myths:
“Even to the extent of deliberate falsification and invention, such ‘lies’ of a people are not wholly gratuitous. They refer to some strata of communal reality where underlying fears, deficiencies, desires and dreams require exorcising or compensating…it can be a truth without tangibility.”

In an era where strident rationalism seeks to create a binary reality of right and wrong, correct and mistaken, true and untrue, fact and irrational belief, the quotation is apposite.

I am in no way anti-science - you should see how pro-medicine I am in a dentist’s couch awaiting anaesthetic for root canal work - nevertheless I am exercised by the way rationalism is expanding its real estate into ethics, religion and mythology.
I may struggle squaring a modern druid’s claim that he is continuing a lineage going back to the priestly class Caesar saw but support his right to say so, because if science drawn from testable data takes us forward as a species, suspending judgment on those whose beliefs differ from our own surely advances our humanity.

This may have little to do with fisherman’s myths but sometimes you need to get things off your chest and set the scene. Delving into such stories is to peer into murky waters which seldom lend themselves to clear outcomes. Anyway, I failed O’ level biology because I preferred the river bank to school.

Anglers are a superstitious lot. Even hard boiled, card carrying atheists are subject to all manner of instinctive calls on their objectivity when they get a rod in their hands. The vicissitudes of the endeavour, the riverside blanks, the soakings, the misfortune and the rare days of unmotivated plenty lend fishermen (and women) a view of nature as essentially capricious. Many species have been subject to angling’s animistic undercurrents. If Jon permits me I may explore others in future but shall begin with the Tench.

Before the modern era, which for the sake of argument began with the popularisation of specimen hunting in the 1970s, angling publications continued to propagate shibboleths that went back decades if not centuries. Dame Juliana Berners, prioress and sport fishing mother-superior wrote in A Treatyse of Fysshynge with an Angle (1496):

“A tench is a good fyssh; and heelith all mannere of other fysshe that ben hurt yf they maye come to hym.”

This is the first surviving description of tench as ‘the doctor fish’ a characteristic that’s been tossed around with varying degrees of credulity in angling books practical and nonsensical for as long as anyone can remember.
The reasons for the notion are hard to deduce. Tench are one of the last species to succumb to deoxygenating and I’ve watched them wallow in a silted, road-truncated, weed-choked canal whose only other fauna appeared to be Barbie dolls skinny dipping in its rainbow coloured pollutants.
The tench seemed to rub along together in the only area containing enough water to hold them; that doesn’t explain the myth of the fish’s healing skin causing other species to seek them out.

Other sentiments that have attached themselves to tench, such as the pike’s reciprocal avoidance of tinca tinca as part of its diet for medical services rendered are certainly untrue - tench have been found in many a pike’s stomach (along with rats, frogs, dog foetus, sand martins and even human embryo - but that’s another story).

The best visual evidence I can come up with is a passage by Dr. Tate Regan, icthyologist, in British Freshwater Fishes, (1911) quoted by Falkus and Buller.

“My friend, the late Dr Boedler Sharpe, told me that one day in May he stood on the bridge over the lake at Avington and watched a large Tench lying in the water below; a shoal of Perch swam up and lay round and above the Tench and appeared to be rubbing against him; on being disturbed they swam back under the bridge, but soon repaired again to the Tench and repeated this manoeuvre several times. The meaning of this is obscure, but there can be little doubt that observation of similar incidents has lead to belief in the healing powers of the Tench.”

Use of the pectoral fins in spawning is common to many freshwater fish, especially cyprinids and rubbing contains practical and possibly ritualistic mechanisms but I am at a loss as to why other fish might seek out tench for a quick rub. I welcome any theories or wild conjecture to help nail this one.

One undisputed characteristic of tench is they are growing exponentially, most likely due to the quantity of artificial high-protein ground bait used in still waters by anglers in pursuit of carp, tench and bream. Boilies, balls of exotic flavours mixed with egg and bread paste and boiled have seen the definition of a specimen tench virtually double in weight in my lifetime. The current rod-caught British record stands at 15 lbs and the majority of fish almost that weight have been caught in the last twenty years.

Traditional angling literature often explores the tench’s unseen nature and the still, unchanging ponds with which it’s associated. One of the best evocations of night fishing for tench was by ‘BB’ (Denys Watkins-Pitchford) in a magical passage where he counterpoints the bucolic surroundings with the bombers amassing overhead on their way to Germany.

Next time I shall look at the bizarre lifestyle and legends of the lamprey. 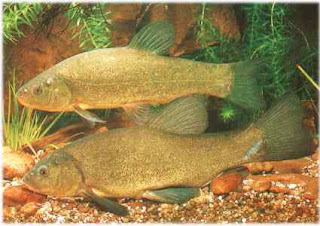