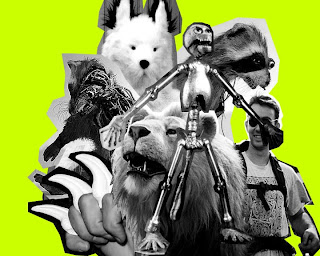 Gail Pickering presents CONVENTION!Saturday 17 Jan, 2009. 5pm - MidnightEvent Horizon at the Royal Academy of Arts, 6 Burlington Gardens, London W1Entry £6 from 6pm - free before 6pm (no re-admission)
A collaborative evening of performances, films, lectures and music with Militant Esthetix, The Centre for Fortean Zoology, Isobel Harbison Who Zoo?, Anthropomorphic Furry Fandom, Bambi's Ecstasy, Torn-Taun, Big Dog, readings with 'Philip K. Dick', Fischli and Weiss' 'The Right Way' (1983) and The Tea and Toast Band. Plus late night screening...
--------------Saturday 17 Jan, 2009. 5pm - Midnight
5pm ... Screening ... Fischli and Weiss 'The Right Way' (1983): the Rat and the Bear hike through the mountains, at the mercy of the elements, miracles and themselves. Rat and Bear try to find reason for all they see and experience, getting closer than expected to the right way. Courtesy Sprüth Magers Gallery.
6pm ... 'Philip K Dick' reads 'The Preserving Machine' ... "Doc Labyrinth was no mechanic. He made a few tentative sketches and sent them hopefully around to the research laboratories. Most of them were much too busy with war contracts, of course."
6.15pm ... Performance ... Monkey Love6.30pm ... Militant Esthetix ... Two ways to reskin a cat - Reimarus-trumpeting bits o' lecture on animal aesthetics undermined by non-Cartesian wax-crayon gestural expressionism a la Congo the Chimp, occasional childcare, hotel shampoo-bottle on pie-tin percussion, amidst various polemical outblastings.
7.15pm ... Performance and film ... Bambi's Ecstasy... with Sergei Eisenstein and Bambi.
7.30pm ... Centre For Fortean Zoology ... Cryptozoologist Jonathan Downes on the centre's research and expeditions in search of mystery animals, out-of-place animals, zoomorphic phenomena, folkloric animal archetypes and rare, unusual and abberant animal behaviour.
8.20pm ... Performance ... Torn-Taun... discombobulated beasts and Han's search for Luke.
8.30pm ... Isobel Harbison 'Who Zoo?' ... a play park of mimicry, performed by a range of species and genders for reasons of radical subversion, straight forward necessity or moderate self amusement. Who Zoo is a collection of beings, catagorised, un-categorised, displayed in their natural habitat and intimately observed by the Who Zoologist 'Traveling Uncle Matt' of the Fraggles.
9.15pm ... Performance ... 'BIG DOG' and 'Philip K Dick' reads 'Roog'
9.30pm ... Performance and film ... 'The Equus Noise' horse worship in one act Peter Firth versus Harry Potter
9.45pm ... The Tea And Toast Band ... Discovered through fission in the early 21st century, T&TB started with a molecular structure similar to armoniurm carbonate (a blue gas) and eventually became a liquid form of the same compound (but semi opaque). After a nasty shock it became a music-playing band with stories, real drums and costumes.
10.55pm ... Special screening ...
--------------
Event Horizon is further supported by The Henry Moore Foundation and Arts Council England.
Posted by Jon Downes at 3:29 PM