DR DAZ DOES IT AGAIN 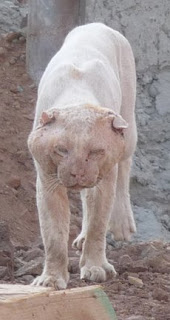 I am seriously disappointed with Dr Naish. He has not taken up my challenge to carry on the Dr Seuss motif on his excellent and ever improving Tetrapod Zoology blog, so I shall throw down the gauntlet again by introducing this particular story in the style of Postman Pat:

"Dr Daz, Dr Daz
look at all the mystery cats he has"

For, in his words: "It's very funny how things sometimes work out. I had absolutely no plans whatsoever to cover cats at Tet Zoo this week. Then, on Friday, I watched the documentary that featured the pogeyan* and, obviously, decided that it was worth covering. And, during the County Museum visit on Saturday, my encounter with the Hayling Island Jungle cat was totally fortuitous: I'd forgotten that it was there, and probably would have missed it were it not for the fact that Chris Palmer got it out of its cabinet. Yesterday, I received some very interesting photos from Ryan Norris at the University of Vermont. As you can see, these photos feature a cat. A very, very weird cat. So, for the third time this week, here's yet another mystery cat... Maybe I should go the whole hog and make this 'mystery cat' week..."

The pictures are hiughly peculiar, and it is very difficult to know what to make of them. I, for one, have never seen anything quite like them. This animal was photographed on a building site in southern Yemen where - apparently - it is a regular visitor. But what the heck is it?

Darren goes through a list of possible identities before reluctantly concluding:

"The battered, asymmetrical ears and scars - combined with the fact that the animal regularly visits a building site and seems relatively unafraid of people - indicate that it's a feral domestic cat, and presumably a battered, and perhaps diseased, male. What do you think?"

I tend to agree with him, although it goes against every grain of my being to accept such a prosaic explanation for such a peculiar looking beastie.

However, whilst we are in the Arabian Peninsula I will give you a very tantalising little snippet that we have been working on since before Christmas. In mid December I was contacted by Jan Scarff, an old mate of mine who is now living and working in Oman. Apparently in recent months there have been sightings of a lion in one of the more remote mountainous regions. Whilst it is probable that any such animal has escaped from a private zoo, either owned by some sheikh, or by a rich businessman or hotel complex, there is an outside possibility that it could be something else entirely.

According to Guggisberg's Wild Cats of the World (1975) there were lions in Mesopotamia until WW1 and in Iran until at least the 1920s. Wikipedia says that they were found even more recently but I have not been able to ascertain when they became extinct on the Arabian peninsuala. Indeed although it was the barbary lion that was known from north Africa, and the Asiatic lion that was known in the Middle East - but which subspecies was found in Arabia?

If anyone can email me on jon@eclipse.co.uk with answers to any of these conundra I would be most grateful. In the meantime, whatever Darren's bizarre felid turns out to be, isn't it a wonderful feeling to know that there are still so many animal mysteried left to explore...
Posted by Jon Downes at 12:59 PM

LANETTE BAKER WRITES: New to site, but love it and all the articles. As for the cat article that was posted today.......

I run a humane society and to me the head and front legs on that cat look as if it has the mange, which would account for the swelling around its head (staff setting in maybe). Also they eyes look funked over, which that could be the view of the camera. And animal that sick, wild or not, would not have as much care about things.
I am not an expert but I am using my experience with what I run into here.

(After I wrote to her for permission to post the above comment to the blog) LANETTE BAKER WRITES:

That is fine, I was actually looking for some pictures earlier of a cat I had here that looked the same but of course a smaller version. I have some very recent pictures of a dog with severe mange that I was kidding with a friend about asking if it was chupakabra pics.....

LANETTE BAKER WRITES: I have been sharing the pictures of the cats with friends. Most of my friends are in the animal field and some are the strange sort like me who have fennec fox's for pets, who foster wild life, and who expect all the 4legged and 2 legged kids to get along. *grin*

About the picture of the small cat...... is there in sort of small chance that it might of been photo shopped? I did not think about it till they pointed a couple things out to me. The tail seems to be set particularly and I was told the head seemed "off". This was pointed out by a retired zoo vet when he looked closer at the picture.

I do not want to be a pain in the arse asking questions and so forth, so please let me know if I am being one.

I want to thank you for the site and your time in it. I enjoy taking my breaks reading your updates.

KIFCAT WRITES: Just a private, totally unscientific, gut-instinct opinion, but the thickened forelegs and something about the head said LION to me, especially after I read your erudite and annotated comments (which I do not have time to pursue). I kept going back to the photo, saying ‘cat or lion’ and LION kept coming into my head. It does seem aged and blind.

I am involved with a feral cat abatement group, so have seen hundreds and hundreds of feral cats in the last 6 years, pre- and post-mortem, and find their forelegs to be of a fine structure. Cat skulls are quite round, and do not, in general, have the wide, flattened facies seen in the photo.

Good luck with the research,