CRYPTOZOOLOGY NEWS: IN THE NIGHT ALL CATS ARE GREY 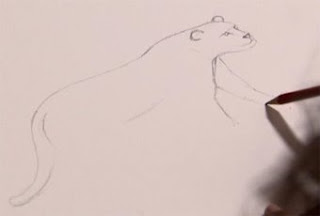 On the excellent Tetrapod Zoology blog our friend and colleague Darren Naish details what may be a new species of leopard sized cat from India’s Western Ghats. The creature was discussed in BBC 2’s series The Natural World in an episode entitled Mountains of the Monsoon Friday 16th of January.

The pogeyam is said to be large, have rounded ears, a long tail and be gray in colour. Environmentalist Sandesh Kadur saw the creature in broad daylight, in the high-altitude grasslands around Anamudi. He set up a camera trap with bait but the pogeyam did not reapprear. Native people have long known of its existance, calling it ‘the cat that comes and goes with the mist’. There are no known photographs of the beast, but this drawing is excerpted from the BBC documentary on the wildlife of the Western Ghats (described above)that can be viewed HERE

It is possible that this is an unkown species or a colour morph of the leopard. Leopards have been known to exibit a wide variety of morphs. However the melanistic morph or black panther is the only commonly occuring one, the others are rare. So if people have been consistently reporting this big grey cat it would arge that this is either a new species or an isolated group of leopards with a dominant gene for this colour. This has occurred in other mammals such as the American black bear that has a white population on Queen Charlotte Island. We await more information with baited breath. With this new cryptid hot on the heels of yeti sightings, the Western Ghats seem like the place to head for.

The pogeyam is not the only new mystery cat to have emerged recently. A small, beautifuly marked cat was photographed by Aldo Sornorza of Fundacion Jocotco at the Jorupe Reserve, Ecuador close to the border with Peru. 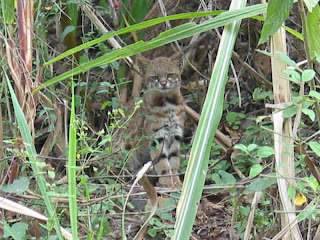 This photograph was taken by Aldo Sornoza of Fundación Jocotoco (FJ), who was helping with the construction of the new visitors' lodge on the Jorupe Reserve, Ecuador. It is thought to be a new species of cat, still to be described, which was first seen two years ago in Peru. The Jorupe Reserve, owned and managed by the World Land Trust's partners FJ, is close to the border with Peru and this would be the first known sighting in Ecuador.

If not a new species, the only other cat it could possibly be is an Andean Cat (Oreailurus jacobita), one of the rarest of all the cat species, about which very little is known. Its habitat and appearance make it the small cat analogue of the Snow Leopard. While it is only about the size of a domestic cat, it appears larger because of its long tail and silvery-gray, striped and spotted long fur.

It is believed to live only in the high Andes mountains of Peru, Bolivia, Chile, and Argentina. It has been sighted at elevations of 5,100 meters, well above the tree line. Since it lives only in the high mountains, human-inhabited valleys act as barriers, fragmenting the population, meaning that even low levels of poaching could be devastating. It is often killed in Chile and Bolivia because of local superstition.

Over the last 25 years there have been fewer than 10 documented sightings. Lou Jost, of Fundación EcoMinga, also an Ecuadorian partner of the WLT, is lucky enough to have seen the Andean Cat, not just once but twice. When presented with this photo, Lou commented:

"The ground color is very similar. However I didn't see any strong patterns on the legs, like this one has, though I would not have seen that from the angles I had (just the back and sides of the animal running through dense vegetation, both times). The elevations of my sightings were very high, around 2800-3000 m, and very wet, completely different from Jorupe. I could easily imagine that there is a new species of cat endemic to the Tumbesian zone of SW Ecuador and NW Peru."
Posted by Jon Downes at 3:17 PM

JAN EDWARDS WRITES: Regarding the photo of the new cat species, in my very humble opinion, it can’t be Oreailurus jacobita. Compare your photo HERE with the Andean Cat HERE

You’ll see they are similar, but not similar enough, even taking colour variations into account.

The head shape is different (although this could be that the 2 cats are different sexes). The stance of the cat on your website is different – it is less stocky... more slender, almost regal. I realize the 2 photos are taken from different angles, but it wouldn’t make that much difference.

The stripes on the front legs are very different in the 2 pictures. Even taking into account regional variations, it seems too much of a difference to me. The markings on the head, you have identical stripes running from the far edge of each eye (away from the nose), but on your picture there is also a tear-stain dark mark similar to the one seen on cheetahs. This seems to be missing on the cat in the other picture.

I think you are right – you got a new species there.