Colombian Hippos - a story not to be sniffed at? 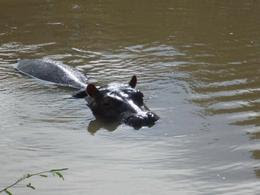 Invasive species - animals which have been introduced accidentally or on purpose from a foreign land, and which now flourish to the detriment of native species, are a conservationists nightmare all across the world. The subject is often broached on these pages, but recently the question came up: "What is the largest invasive species in the world?"

Good old Wildlife Extra posed a similar question, and - I imagine - were as surprised as we are with the probably answers.

"Pablo Escobar, the notorious drugs lord, had so much money that he didn't know what to do with it. Amongst other things (A bullring, an airstrip, an ersatz Jurassic Park with half a dozen immense concrete dinosaurs.), he stocked part of his huge estate with hundreds of exotic animals, including elephants, camels, giraffes, ostriches and zebras. He created a lake for hippos and four were released into the lake.

Escobar was killed by Colombian security forces in 1993 and the ownership of the ranch has passed into government hands. All the exotic animals have long since disappeared, except the hippos. The original four founded a herd that now numbers 19, and no one knows what to do with them. They are becoming a pest as they roam the local countryside at night looking for food - One was recently shot by a local farmer some 3 miles away. The hacienda is not securely fenced and the park management does not have the funds to erect a suitable fence, or to feed the animals. "

For more details Read On

Being who we are, I offered this story to various members of the CFZ team, including my friend Charlie. I thought this was a toot of an opportunity; an article not to be sniffed at. However, they all turned it down, saying that they would not be able to stay within the white lines of CFZ protocol, and not make a string of cocaine jokes.