KARA WADHAM: The return of the Bugfest Blog 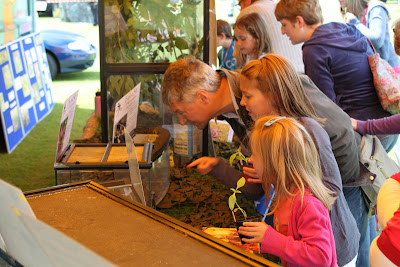 Something has happened to Bugfest. It’s grown considerably. From our New Year's Day count of 15 000 hits on our website, the figure has grown exponentially in the last couple of weeks. We attribute this to a number of factors. Last April Nick made the decision to register Bugfest as a business due to the growing number of birthday party and school talk bookings he was receiving. Although this is never going to make us rich it became substantial enough for the tax man to notice (and he notices everything).

Over the summer Bugfest visited lots of local towns on a play-days road show organised by the local council. There Nick and the bugs met thousands of people, all eager to gaze at a goliath or screw up their nose at a s 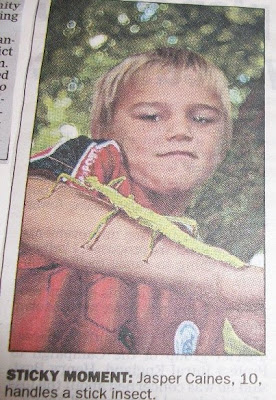 nail. Nick was able to cure long-standing phobias and dispel the myths about our creepy crawly crew. The summer also saw Bugfest putting on a display for the Phasmid Study Group bi-annual meeting at the Natural History Museum in London, which raised Bugfest’s profile and status among the invertebrate fraternity.

With only a few weeks to go until Bugfest 6 we have already secured some top notch names and stands with a bevy of followers promising to attend the day itself. Nick has taken over the organisation this year due to my work commitments and present ill health. The local paper have asked him to write a column promoting Bugs and the Bugfest 6 event on 26th February and we were lucky enough to have a photographer visit the house on probably the day I felt most ill! Luckily he only wanted to take pictures of spiders. An ailing grey lady just wouldn’t do it for anyone!

Bugfest is growing. Keep watching our website to watch the numbers grow and find out about our latest event.