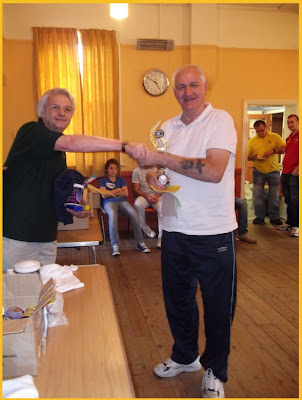 On Sunday 11th September seasoned and novice Aquarists alike travelled from many corners of the U.K. in order to join the members of the Ryedale Aquarist Society for their annual aquarium fish Open Show, which was held at the Old Malton Memorial Hall, North Yorkshire.

A total of 216 entries were spread over the various classes. The Best in Show was given to a Metriaclima lombardoi (86.7 points) that is so well cared for by Mr & Mrs Nelson of Ashby Fishkeepers. Mr B. Kerrigan (STAMPS) won the Best Exhibit with a stunning looking breeders group of Corydoras sterbai. The Best Goldfish Award was presented to Mr P. Flinn (Birtley A.S.) while Master H. Vallely (Ind.) won the Junior Award, showing for the first time at an Open Show. 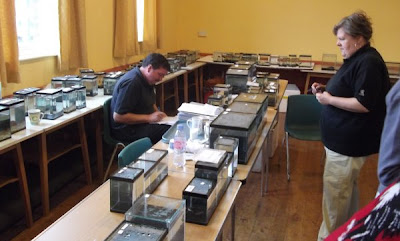 Information stands were displayed by Fishphilosophy of Worksop and the International Loach Association.

The Ryedale members send their thanks to the small army of helpers from both the Y.A.A.S. and T.T.A.A.F.B.A.S. for their wonderful help, to all the exhibitors who brought along their best fish, to the people who brought their auction ‘lots’, aquatic industry and tourist attractions for their generous support, to all our friends who made the journey to be with us and interested visitors from the Ryedale area who came along to view the fish exhibits.
Posted by Jon Downes at 10:38 PM No comments:

Hello again. Here is the story of a huge fox in Surrey, which ran on the Wild About Britain Forum in April and May 2011 continuing from Part One.

If you go to a take away late at night in Bristol and sit down to eat it just off the main road close to a church yard or waste land, you will fairly quickly get up close to some quite large foxes thanks to all the junk food and easy to access bins providing a year round food source on top of the large rat population etc.

The foxes I tend to see very frequently when in Yorkshire are both thinner and also smaller in stature as there is not such a ready supply of discarded food so they have to work for their meals.

When I lived in Norway a person up the road had a pet red and Arctic fox, soft as any thing as they had been raised as pets after being saved when young from the fur trade.

We all get things that we always “ wonder” about. You may well have to put this down to one of them. The longer you live, the more things you see that make you wonder. I expected them to get less with experience.

It was probably a large, very healthy dog fox. They are quite impressive and do appear larger than life. Beautiful creatures. I am not too far from Tilford either.
Posted by Jon Downes at 11:59 AM No comments:

Announcement from the Center for Snake Conservation--please distribute widely as anyone can participate.

Spend a day or a week in the field and help conserve snakes! There are ±295 species/subspecies of snakes in the United States but very little is known about their current conservation status and distributions in today's human impacted environment. In order to ensure that appropriate and adequate conservation efforts are applied to snakes, we need to understand more about them and where they occur.

Therefore, the 1st Annual Center for Snake Conservation Fall Snake Count will be held from September 17 - 23, 2011 during Snake Week.

On this day in 1975 Patty Hurst was arrested after being on the run for 1 year. Hurst was kidnapped the previous year by a criminal group called the Symbionese Liberation Army, but she later joined up with them.
And now the news:

In relation to today’s ‘on this day’:
http://www.youtube.com/watch?v=WhRRWwH3Fro
Posted by Jon Downes at 11:32 AM No comments:

If you’ve never heard a true Northern Minnesota accent, you will here.

Us city folks down here in Minneapolis sound nothing like this, frickin hicks J

Most people have to turn on Discovery Channel if they want to see an 800-pound beast in the wild. Minnesotans can see the real thing in our north woods—a moose. The back roads of Superior National Forest offer the perfect boreal-forest habitat for moose and a moose-watching safari: wetlands and greened-up areas of tree saplings regenerating after clear-cuts and fires.

Come fall, bull moose go into rut, and cows are in estrus. And during this mating season, Minnesota's ultimate megafauna exhibit some fascinating behaviour. You might encounter a big bull thrashing willows with his massive rack, a cow moaning to lure a mate and just maybe two brawny moose locking antlers in a head-crashing duel.

With a little knowledge of rut behavior, moose-watchers can increase their chances of seeing a spectacular show.

Prime Time. Mating season for moose begins around the third week of September and can last into late October. This is when a big bull is at his grandest, with a hard, bony rack—rubbed free of velvet in early September—now finely polished by rubbing on trees and brush.

"The rut is when moose are on their feet almost constantly, the most mobile they'll be all year, and so they're as visible to people as they're going to be," says Tom Rusch, Department of Natural Resources area wildlife manager in Tower.

Rusch says the photoperiod (decreasing amount of daylight as autumn progresses) is the biological trigger for the rut, but the weather can ramp it up or shut it down. "Seasonably cold weather seems to kick the rut into gear come late September. After a clear, chilly night, the bulls can really get going," he says. "But if there's a warm stretch, moose get less active. If it stays warm, the rut becomes a nighttime activity."

Search for Sign. Bull moose leave signs of their rutting rituals in the woods. Trees with patches of bark rubbed off could be spots where a bull left his calling card.

Cow moose also leave bare spots on tree trunks. A cow strips the bark with her mouth, then rubs her head on the wood to leave a scent with special glands on her forehead near her eyes and behind her ears. The scent advertises to bulls that the cow is in estrus.

Bull moose likewise advertise to cows via scent, using wallow pits. A bull scrapes a pit a few inches deep and a couple of feet wide and urinates in it. Then he dips his head, antlers, and dewlap into the pit. Because his dewlap is filled with capillaries and very warm, it intensifies the scent of his moose cologne.

Mating Calls. Quite often, people hear a rutting moose before they see one. Cows let out a long, wavering moan, which can carry as far as a mile. Bulls respond with a series of short grunts. If a cow and a bull moose detect each other, they play a game of Marco Polo—moans, followed by grunt replies—until the bull zeroes in on the cow's location. Moose can triangulate the source of these sounds from a long way off, even in heavy cover.

Brave souls can mimic the calls of rutting moose to bring a bull or a cow in for a closer view. Traditionalists use a scroll of birch bark rolled up like a megaphone (a time-honoured Ojibwe technique) to broadcast their moose calls, but others just cup their hands.

Moose callers should be wary if they're lucky enough to get near a moose. Bulls can be ornery during the rut, occasionally charging people, cars, and even trains.

Where to Look. The prime places to see moose in mating season are wide-open spaces in the woods or shallow waters—any place a moose's call is most audible to a potential mate and moose can clearly see each other.

Rusch suggests that moose-watchers plot a day trip by getting a map of the Superior National Forest and looking for a loop of forest roads. Good moosing routes include the Gunflint and Arrowhead trails near Grand Marais, the Echo Trail, and state Highway 1 near Ely, and County Road 7 and the Stony River Grade road near Finland and Isabella.

"Peak moose breeding time and fall color tend to overlap in northeast Minnesota, generally between Oct. 5 and 15. Combining [moose watching and foliage viewing] can make for a beautiful trip and exciting photo opportunities," says Rusch. "I would recommend spending time in good moose country in mid-October. Visibility improves as the leaves begin falling and the underbrush opens up at this time."

Rusch also warns that moose are unpredictable wild animals, so moose-watchers should use common sense: "Remember, you're not at a zoo. Keep a respectable distance from any moose, and have a big tree or vehicle near you for an escape plan."

For those willing to brave the risk, "a handsome bull moose with huge beams for antlers can be a once-in-a-lifetime experience, something most people never get to see," Rusch says. "It's one of those things that makes the north woods so special."
Posted by Jon Downes at 9:51 AM No comments: 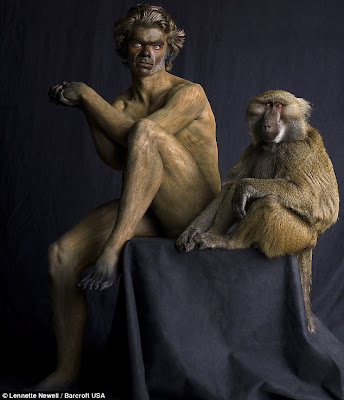 Posted by Jon Downes at 9:11 AM No comments: