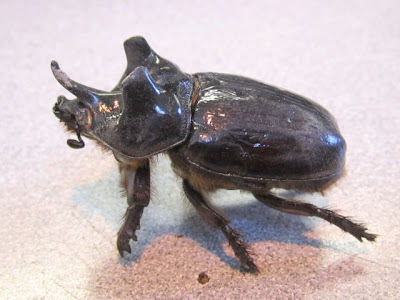 Jon... yesterday, July 3/10, I was at work when I opened a box that came to us from Mexico. And to my surprise I found a rather large and very beautiful beetle inside. It is about one and a half inches in length and quite dead. What is it...? Cheers


It is a rhinoceros beetle of some description but as to species, I am going to have to ask the good folk of the bloggo.
Posted by Jon Downes at 12:10 PM 2 comments:

Rømsjøen, or Rømmen as it used to be called, is a small lake in Østfold in Norway. It is quite a small lake when compared to lakes like Loch Ness but there have been reports since the 1700s of a monster in the lake. The first account described the creature as having a head resembling a cow and a body like a log. The stories and reports of sightings have continued since.


Astrid Myrvold was 88 years old in 1993 and told a story of when she was 24 in 1929, and had an encounter with a strange creature at the lake on a summer’s day. One of Astrid`s chores was to fetch a bucket of water from the lake. On her return journey she paused because of the hot sun by the house. Looking back out onto the lake’s mirror-like surface she saw something big and black lying on land. She described it looking like a long tube.

She watched the animal moving through the grass and the short reeds and followed its path by the movement of the vegetation. Then it slid into the water only to surface again. She saw the head emerge and described it as like the head of a foal with two ears standing erect. Then it took off, swimming fast across the small bay. Astrid said she could see how the body undulated looking like many coils. The tail was fish-like and the swimming creature left a wake like a boat. She ran to tell her mother who was baking bread. Her mother on hearing her story, left the bread and hurried down to the shore. Astrid was scared and refused her mother to go right to the edge of the water. Her mother believed her story but others made fun of here so the story didn’t come to light until sightings in 1976 were publicised.


In the 1930s an anonymous witness was returning through the woods one night after visiting a friend. He saw an unknown animal in front of him, which looked like a big, black, crawling mass, and reminded him of a forest snail. It was estimated to 10-12 feet ( 3-4 metres) long. The man was quite shocked and scared and fled as soon as the creature went into the lake.


Then in 1970s reports appeared again of something in the lake.


1974 - again on a summer day between Ramberg and Haukenes something strange was seen by Kjell Roger Nilsen and his wife Bjørg, Rømskog. "At a distance of 500 meters we saw something big that kept swimming in circles, at the same time making loud audible splashes. I was bathing with my wife Bjørg. I do not remember how long the commotion went on, but my theory at first was that it was a pair of mating pikes or several big pikes playing in the surface. However, it was so strange and inexplicable that for years we did not tell anyone, mostly of fear we would not be taken seriously"


In 1976, September 20th, on another sunny afternoon, a bus driver Asbjørn Holmedal, from Rømskog, his wife and several school children saw something in the lake: "When the bus passed Stranden about 700 meters from the junction to the church, I and some of the passengers saw a strange thing that seemed to be swimming towards the shore. I stopped the bus and everybody got out to have look. We watched the weird thing for a while. At last it dropped out of sight and all was quiet. At first I thought it was a swimming moose, a notion I soon had to discard. I have seen swimming moose before, but this was so long that there must be another explanation. It was about 10 metres ( 30 feet) long, black and only just breaking the surface. The waves it created reminded of waves from a boat with an outboard engine. It submerged when we tried to get closer down by the edge of the water. The distance to it was 15 – 20 metres( 45-60 feet) when it submerged." Asbjørn said that he at first thought it was a swimming moose. He told the children and stopped the bus to let them see it. He realized it was something strange, and everybody got out for a better look.


In 1992 something was seen by Thorleif and Bjørg Bøhn and their daughter Anne Grethe, again on a nice summer day. Bjørg was down at the jetty drying herself after a morning swim. On her way back to the family cabin she turned and looked back at the lake and saw an oval thing about 5 metres (15 feet) long . She ran inside the house and summoned her husband and daughter: “Come and see, the sea serpent’s coming! No wait, it’s a crocodile. From the windows they could all see a dark object in the water, about 10–15 metres (33-49feet) from the shore. It was about 1.5 metres (5feet) long and 25–30 cm (10-12 in) or more in width, heading for the shore leaving it a small wake behind it. After 10–15 seconds, it suddenly dived and disappeared. They estimated it rose above the water by 10–15 cm (4-6in )They ran to the shore to have a better look. When they got there, the creature had already submerged. Where the water was 2–3 metres (7-10ft) deep, they could see disturbances, as if something was moving in the depths.

Rømskog town council offered a reward of 10,000 Norwegian Kronerfor the capture of the creature .The reward has not yet been claimed.


So was it misidentification or a giant eel or fish or water snake of some description?

2002 article on the creature:
http://www.forteantimes.com/features/articles/255/in_search_of_norways_nessie_rmmie.html

Once while cycling along the Great Glen in Scottish Highlands I stopped along the shores of Loch Oich. The only thing I can remember about that day was that it was raining and I was very wet, and that there wasn’t a great deal to look at apart from the rain.

But that was years ago and since then I have found that there is plenty more to Loch Oich than water falling from the sky. Loch Oich is a fresh water loch that forms part of the Caledonian Canal connected by the Laggan lochs to Loch Lochy; it has also played home to a mystery creature

The story goes that on 13th August 1936 Alderman A.J. Richards along with his son and a friend were boating at the Laggan end of Loch Oich when they saw something rather unusual appear out of the water. A weird looking black creature emerged, at first just two humps likened to the coils of a snake broke the surface just a few yards from the boat, the humps were soon followed by the creature’s head which was like that of dog. Alderman Richards stated that the humps were about three feet in both height and length and also three feet apart from each other with the head of the animal further on.

While they might not have been able to identify the creature the editor of the Northern Chronicle did have a rather clever idea and that was to see if the Fishery Board could arrange the dredging of the loch with their nets, sadly they never took up the suggestion.
Posted by Jon Downes at 11:44 AM 7 comments:

CFZ AUSTRALIA IN THE NEWS AGAIN 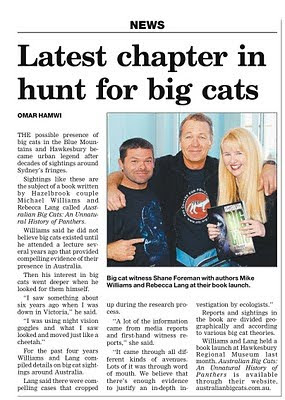 On this day in 1947 an Unidentified Flying Object, claimed by some to have been an alien space craft and others a weather balloon or top secret US plane, crashed near Roswell. More info here for you to read after you finish reading the blog today: http://en.wikipedia.org/wiki/Roswell_UFO_incident
And now, the news:

A good idea to fish for publicity.