Dave and Eve at The Farmers Arms are doing us proud. The sunday meal will cost £8.00 (a massive 5p price hike since 2007) and is roast beef or pork for the carnivores, and vegetarian lasagne or three cheese and mushroom falafel for the veggies.

The latest two blog postings at Frontiers of Zoology are on Japanese Yokai that seem to have some bearing on Abominable Snowman or Wildman reports:

And on the Frontiers of Anthropology blog, Part 3 of Surveys of Atlantis dealing with the reality of a large island formerly situated in the mid-North Atlantic during the Ice Ages:

Posted by Jon Downes at 6:55 PM No comments: 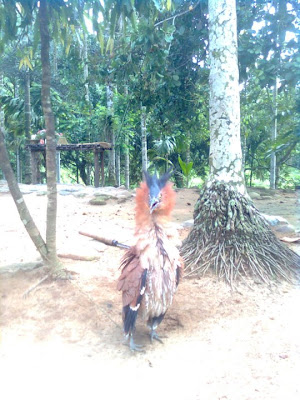 Vaishali Sangma took a photo of this weird bird in the Garo Hills. It looks like a young hornbbill of some sort to me. None of the Garo guys can identify it. Can any of our readers?

I always hope The Marine Observer journal will turn up something strange and today I was fortunate – please read on. (This is an extract from vol. 36, 1966)

The Marine Observer publishes extracts from mariners logs from all around the world, astronomical, meteorological data and news of weather observers, etc. As far as I know it is still published. I`ve been looking through my back issues from the 1950s and 1960s for reports of seals in the S.China Sea and Indian Ocean.

13th June 1965. Between 20 °N, 49 ½ ° W,and 24°N, 53°W (2) many fish were seen in the surface water. They were about 1 ft long and had large square heads with the body tapering to the tail, the general appearance being rather like that of a very large tadpole, and having the same swimming motion. The colour was a mottled grey and no fins were seen. The eyes were on the flat of the head rather than at the sides. Sea temp.77°F rising to 80°

Note. This is a most unusual observation. Dr P.H. Greenwood of the Department of Zoology, British Museum, comments:

“I have puzzled over this, my marine colleagues have also puzzled over it and none of us can come up with an answer. The only tadpole-like fishes which we know are either fresh-water (and certainly never likely to occur in the sea except as corpses) or are deep-sea fishes and unlikely to be swimming at the surface in an apparently natural way. Thus, regrettably for the moment I am afraid we will have to record these as unidentifiable.” (3)

So there we are, it`s over to you!

On this day in 1057 King Macbeth of Scotland died. Shakespeare's play 'Macbeth' is one of his strangest featuring not only witches and prophecies but ghosts as well, it doesn't have much to do with the real Macbeth though, who by accounts of people at the time was not that bad a king at all and killed the Previous king, Duncan, on the battlefield and not in his bedroom framing his guards as the play would have you believe.
And now the news:

Rediscovery of Disappeared Species: Truly Back fro...
Albino lobster among catch of unusual species
'Lost' lichen found after over 100 years near Ando...
Female stingrays give birth to baby rays despite n...
Killer plant 'eats' great tit at Somerset nursery
Best of Summer: Search for the storied serpent
Hedgehogs could be extinct in 15 years, warns zool...