What do we know about Uruguay? Wel,l it did host the first ever World Cup and has won the contest twice, which is far more than some countries have managed. As well as football it has a cryptozoological claim to fame: the Minhocão.

The Minhocão is a most interesting mystery animal with many contenders with a claim to be the animal behind the name. The name itself is Portuguese for 'giant earthworm'; descriptions give the animal a thick, bony, armoured skin or scales, and a head that sports a pair of horns and a pig-like snout. With a body length of 150 feet and a track measuring a mighty15 feet in width it is hardly surprising that its trail is marked by fallen trees, collapsed roads and new river channels.

It was in 1849 while travelling in Termas del Aparey that Lebino Josė dos Santos heard of a dead Minhocão that had managed to expire while caught in a narrow cleft of rock. He would describe the skin as being as thick as a pine tree’s bark and that the body was covered in scales like an armadillo.

For an animal described as a big worm the Minhocão does seem to have generated a number of theories about its possible origin. It has been suggested that it could be an undisclosed giant scaly lungfish whose pectoral fins could be mistaken for horns. Or perhaps it’s a giant species of caecilian, a worm-like amphibian that burrows underground; however, the Minhocão is considerably longer than the 5 feet recorded for the longest known burrowing caecilian. But at least it is worm-like, which is more than can be said for the next candidate for the Minhocão: a late surviving form of glyptodont, a heavily armoured large armadillo that grew up to 10 feet long. There is one drawback to this theory: the animal is not suspected of having been a burrower. Of course it could always be an example of that often mentioned South America cryptid the giant anaconda.

Next stop: Paraguay.
Posted by Jon Downes at 12:31 PM No comments:


Nice Going, Daily Fail; you illustrated a story about a bear with a picture of a wolverine.
Posted by Jon Downes at 12:30 PM No comments: 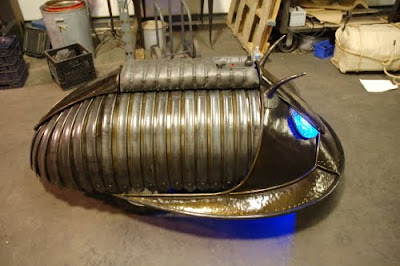 Since Dada and action painting came along it's hard to know what art is. Fortunately, like pornography, you can still recognize it when you see it and a beautifully wrought giant metal trilobite that lights up and that you can ride, is art.

A study by American scientists published in Polar Biology has highlighted the effect of climate change on the lifestyle of polar bears in ways that are not immediately apparent. Most people who have been following the plight of the polar bear are well aware of the fact that the bear is venturing further south into North America and even meeting and mating with grizzly bears producing hybrids with greater regularity than ever before. Fewer people are aware of the effects climate change is having on the lifestyles and mortality rates of the bears further north, which lived on the ice sheet and pack ice.

As the ice begins to melt and gets more sparse this means that polar bears are forced to swim to find other ice upon which to live and hunt from. This becomes a big problem when there is simply no ice nearby and polar bears are forced to swim for days, non-stop, through the open sea. The study revealed, by tracking the bears, the harsh lengths the melting of the ice has forced some polar bears to go to and the tragic and life-threatening consequences.

One polar bear being tracked swam a shocking 9 days and 687km (426 miles) without stopping, across the open ocean just to find land or floating ice. The bear lost 22% of her body fat and her yearling cub. This highlights the additional pressures the polar bear population is under as it tries to find food and suitable habitat in this changing world.

One of the reports authors, zoologist George M. Durner, said:

“This bear swam continuously for 232 hours and 687 km and through waters that were 2-6 degrees C,”

“We are in awe that an animal that spends most of its time on the surface of sea ice could swim constantly for so long in water so cold. It is truly an amazing feat.”

“It was simply more energetically costly for the yearling than the adult to make this long distance swim,”

“In prior decades, before 1995, low-concentration sea ice persisted during summers over the continental shelf in the Beaufort Sea.”

“This means that the distances, and costs to bears, to swim between isolated ice floes or between sea ice and land was relatively small.”

“The extensive summer melt that appears to be typical now in the Beaufort Sea has likely increased the cost of swimming by polar bears.”

Although the IUCN red list lists polar bears as a vulnerable species the American government, both under Republican and Democrat administrations, have shown reluctance to acknowledge this and give the Polar bears the protected status they need. It is often alleged by campaigners that this is because it might hinder plans for American oil companies to exploit Alaska and the seas around it for oil or that oil companies may be forced to help pay for conservation programmes. If either of these theories are correct then it is a very sorry state of affairs indeed that no attempts have been made at a compromise that could save the polar bears.
Posted by Jon Downes at 12:27 PM 1 comment:

A big thank you to Steve Jones who pointed out that I had cocked up the coding for the `buy it now` button on the right of this page. This has now been fixed, so the hundreds of you who tried to buy Weird Weekend tickets at the special recession-busting price of £20 a throw, but failed because of my coding and did not like to point out my failings as an IT dude, can now buy your tickets....
Posted by Jon Downes at 12:23 PM No comments: 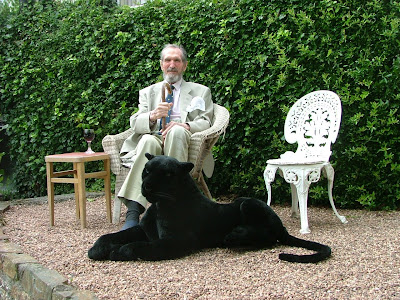 Today, in 1925, my late father was born. It would have been his 86th birthday. We hated each other for most of our lives, but during his last eight months we became friends, and by the time he died (with me holding his hand) we were very close. Not a day goes by that I don't think of him, and I still miss him sorely.

Also, (sorry to relegate you to second place, mate) happy birthday to Nick Wadham from Bugfest. Those of you who are regulars at the WW (and if not, why not?) will know Nick and his family who are rapidly becoming unreplaceable. Have a good one, mate.

And whilst on the subject of birthdays, whilst flu-ified, I inadvertantly missed Dale Drinnon and Tully Reynolds, who had birthdays on New Year's Day, and Richard Freeman who had a birthday on January 4th! Sorry guys.

On this day in 1933 Mohamed Al-Fayad was born. Al-Fayad is perhaps the biggest advocate of of the conspiracy theory that Princess Diana and his son Dodi were killed by the establishment. Personally I think not. The fact is their driver was p****d as a newt and they were being chased by idiot paparazzi who were driving like maniacs in the hope of getting a photograph - no conspiracy is needed.
And now, the news:

Take a guess what I'll be posting as the vaguely related video today, it's not going to be difficult:
http://www.youtube.com/watch?v=Xgcxd9wtXUE
Posted by Jon Downes at 12:20 PM No comments: