And so it is Corinna's birthday. I singularly failed to get her an African bullfrog, but she did get a rather nifty guide to growing mandragora, which made up for it. I will be birthdaying much of today, so I had better get underway with the blogs:

I am rather fond of the Captain Beefheart DVD in the 'Lost Broadcasts' series, not only because the music is peerless, but because it was the first record thatI had written the sales notes for in over 20 years, and I get mildly sentimental about such things...
http://gonzo-multimedia.blogspot.co.uk/2012/07/captain-beefheart-review.html

Erik Norlander really is a multi-talented chap, and I am becoming increasingly fond of his music. It seems that I am not the only person to think so because he is garnering increasingly positive reviews...
http://gonzo-multimedia.blogspot.co.uk/2012/07/link-erik-norlander-review.html

Everybody is getting very excited about the 4CD live album by Jefferson Starship that was recorded at the Roswell UFO Festival. It is set to become one of those legendary live albums that everybody talks about
http://gonzo-multimedia.blogspot.co.uk/2012/07/jefferson-starship-set-to-release-live.html

Jon Anderson's recent US Tour seems to have been a magnificent success. It is a great pleasure, therefore, for me to be able to gather together live reviews like this one. Also, BTW, a little birdie tells me that shows later in the year are not impossible...
http://gonzo-multimedia.blogspot.co.uk/2012/07/link-jon-anderson-strums-to-contented.html

Another massively groovy remix from the massively talented Mimi Page. That girl has so much talent, that if talent were gobstoppers she would have an awful lot of gobstoppers.
http://gonzo-multimedia.blogspot.co.uk/2012/07/mimi-page-tomorrow-heartbreak-remix.html

And finally. It is my wife Corinna's birthday and finally Michael Des Barres new album (which we have been listening to constantly for weeks) is released. Michael wrote to Corinna wishing her a happy birthday, and Corinna is doing the same for Michael. With good vibes like this floating around how could both the birthday and the album launch fail to be less than an overwhelming success.

MAX IS OFF TO CYPRUS 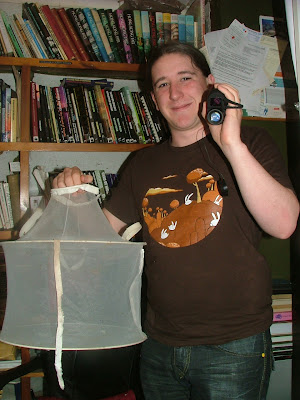 Max Blake, one of thr frighteningly intelligent young men who are the spearhead of the next generation of the CFZ has got his Zoology degree and is off to spend two months working with endangered beetles in Cyprus. He is taking various items of CFZ equipment with him, and we are very proud to be involved. I hope that this will be the first of many times that we can lend equipment to worthy scientific endeavours.

See you in September Maxy
Posted by Jon Downes at 10:42 AM No comments: Posted by Jon Downes at 9:32 AM No comments: