OTT38 is about two thirds completed. We filmed an interview with Rebecca Lang from the CFZ Australia office yesterday. I hope that it will be up sometime tomorrow.
Posted by Jon Downes at 12:09 PM No comments:

Email ThisBlogThis!Share to TwitterShare to FacebookShare to Pinterest
Labels: cfz australia, on the track, rebecca lang

MANY THANKS TO JOHN BEARDSLEY...

...for his generous donation of $20, which is going into the fund that will eventually buy 20 trail cameras. Thank you, mate :)
Posted by Jon Downes at 12:07 PM No comments: 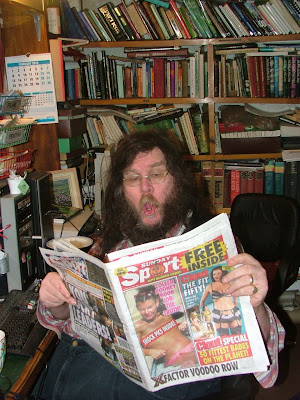 Yes, it is true. I did provide a quote for a mildly smutty story in the highly dubious British tabloid The Sunday Sport last weekend. Yes, it was a joke, and yes, I owed a favour to one of the journalists who helped us many years back when we were chasing a crocodile in Cannoch. No, I didn't get paid for it. No, I don't believe that the picture they printed shows bigfoot playing leapfrog, or engaging in non-standard breeding behaviour. No, I won't be reprinting the article here, although it will find itself in the CFZ archives. This blog is family-orientated and the offending article is inappropriate. Yes, I have a smutty sense of humour to the desperation of my wife. No, although my wife is a feminist, she is still speaking to me....
Posted by Jon Downes at 11:34 AM 2 comments:

THE LATEST PUBLICITY SHOT FROM THE HAUNTED SKIES PROJECT 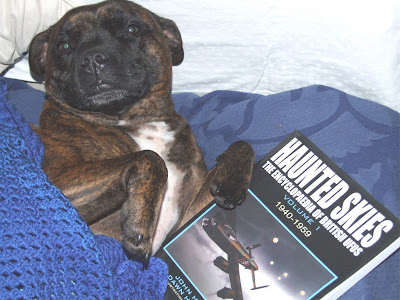 OK, I don't really mean that, but if Labidura herculeana (Fabricius, 1798) were still alive it could escape from the island of St Helena and show up at your house.

The Giant Earwig of St. Helena - The Dodo of the Dermaptera

Labidura herculeana (Fabricius, 1798), a real giant with up to 80mm body length, is sometimes called the Dodo of the Dermaptera. This is because, much like the Dodo, this endemic species lived on a very confined area on a small island in the Atlantic Ocean, St Helena. You could not find it anywhere else on the world.

According to Ashmole & Ashmole (2000), Labidura herculeana (Fabricius, 1798) could be extinct due to the clearing of the gumwood forest where the species lived (in the area of Horse Point), another cause of the alleged extinction could have been the competition with the introduced centipede Scolopendra morsitans.

As it seems, it is now extinct - at least there was no sighting for a considerable time and therefore it is category 'CR B1+2a' in the IUCN Red Lists.
Posted by Jon Downes at 11:22 AM No comments:

THE GLOBAL TEMPLATE FOR MONSTERS


There's something inside us that loves a good monster. We want them scary. We want them surprising. But apparently not too surprising. Across time and across cultures, our monsters come in strangely predictable forms. Read on..
Posted by Jon Downes at 11:15 AM 1 comment:

On this day in 1957 the Levelland UFO case occured.
And now, the news:

Obvious, but its a good song so I make no appologies:
http://www.youtube.com/watch?v=V-BdGchS0yk
Posted by Jon Downes at 11:13 AM No comments:

Just a quick head's up: the new episode of OTT will not be up until at least late tomorrow, and probably Wednesday. This is not because of our usual tardiness, and not even because we were overstretched during the weekend (we were). But we have a special visitor due this afternoon, and we want to include an in-depth chat with her. So guys and girls out in bloggoland, I am afraid that you will have to wait.
Posted by Jon Downes at 11:10 AM No comments: