CRYPTO-ARTS: Baird brings to life a menagerie of folklore creatures in his First Friday exhibit 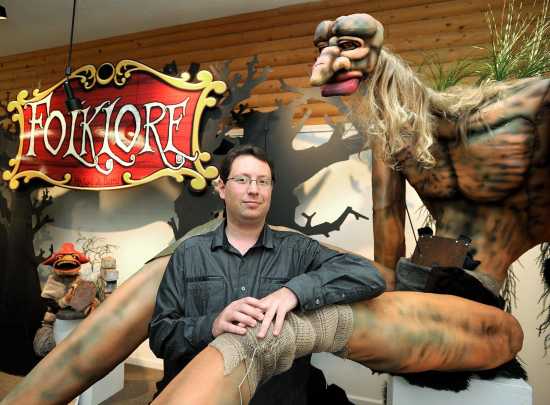 Baird's exhibit, "Folklore," is his vision of "monsters" such as the famed Loch Ness Monster and the ubiquitous "bogeyman" that are noted in folklore around the world.

The monsters featured in Baird's exhibit will be presented in three-dimensional puppet form, with a display of masks that were inspired by the folklore of gnomes, goblins and pixies.
"Monsters and puppets have been an obsession of mine since I was little," Baird said. "I grew up with Jim Henson's Muppets, and I was always interested in learning about one monster or another. Being able to put on an exhibit that combines monsters and puppets seemed like a comfortable fit."

The exhibit at the Arts Council isn't about standard monsters from Hollywood such as Frankenstein's monster or the Wolfman, Baird said. 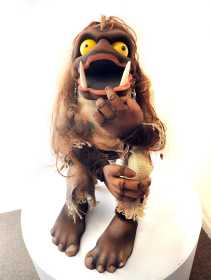 "What I'm presenting is my interpretation of monsters that are somewhat undefinable in folklore," he said. "For instance, there's no real concrete description of the bogeyman, even though parents sometimes tell their children that if they aren't good, the bogeyman will get them. My puppet version of him is really creepy with bony features and a tail."

Baird said expressing his monsters in puppet form is a better way for children to understand them.

"I believe that puppets are more accepted by children than are realistic models," he said. "They're able to grasp the idea better. I've found that realistic models are not as helpful."

Baird, an art instructor at Southeast Missouri State University, said the idea for his exhibit was hatched while he was instructing at Southeast's Art Academy workshops last summer.

"A fellow instructor who knew about my monster creations suggested that I put my works together for an exhibit," he said. "The Arts Council accepted the idea, and we're having it in October so that it can align with Halloween."

The Pacific Northwest may no longer be the only Bigfoot hotbed in the United States, as an Upper Michigan couple say they may have captured the elusive humanoid on a trail camera, according to reports Saturday, Oct. 5.
The sighting was reported by Craig Sulk, of Menominee, Mich., in the Upper Peninsula, and will be featured in an upcoming episode of Animal Planet's Finding Bigfoot.
The story began last March, when Sulk set up a series of cameras on his wooded property. While it is common for trail cameras in the U.P. to capture deer, bears, racoons and coyotes, Sulk wasn't prepared for what he saw while examining photos a couple months later.
Certain it wasn't a shadow, tree or bear, Sulk noticed a creature, which he says stood taller than 5-feet, 8-inches. Perplexed, he immediately told his wife, Barb, he thought he snapped a Sasquatch, Bigfoot's scientific name.
Read on...
Posted by Jon Downes at 2:48 PM No comments:

www.gonzomultimedia.co.uk/about.html
My trusty old Daihatsu failed her MOT terminally today. I mustn't anthropomorphise the car, because the truth was I inherited it from my Father, and never liked it much, but I am now looking for another car. Its an irritation, but not entirely unexpected. The next fortnight is going to be complicated enough as it is, with various comings and goings, and a trip to Manchester leaving Richard in charge of the ranch. But with no car, it will be excruciating.

*  Jon Downes, the Editor of all these ventures (and several others) is an old hippy of 54 who - together with his orange cat (who is currently on sick leave in Staffordshire) and two very small kittens (one of whom is also orange) puts it all together from a converted potato shed in a tumbledown cottage deep in rural Devon which he shares with various fish, and sometimes a small Indian frog. He is ably assisted by his lovely wife Corinna, his bulldog/boxer Prudence, his elderly mother-in-law, and a motley collection of social malcontents. Plus.. did we mention the orange cat?
Posted by Jon Downes at 2:23 PM No comments:

On this day in 2012 the humorously named Felix Baumgartner performed the highest ever parachute jump ever when he jumped from 38969.3m above ground level from a specially constructed balloon. In doing so he also broke the record for highest flight by a balloon and became the first person to break the sound barrier without use of any mechanical propulsion system.


The jump in full with perhaps the lamest most half arsed commentary you'll ever see:

http://www.youtube.com/watch?v=_fOrOueF3jg
Posted by Jon Downes at 2:23 PM No comments: