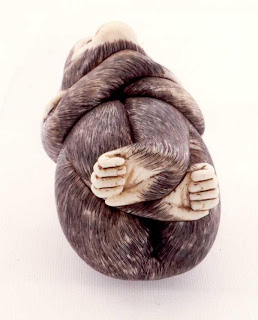 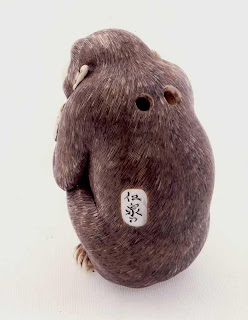 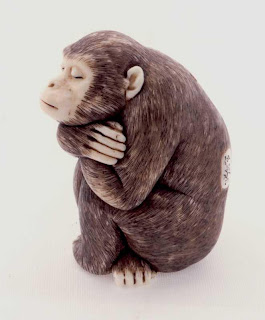 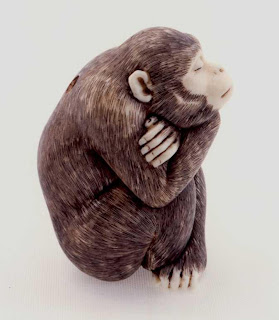 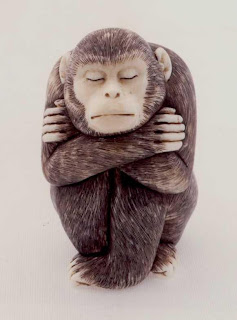 Hibagon is the name for the unidentified apelike cryptid of Japan. Some of its names are also applied to the Kappa and they tend to merge together in legend. Hibagon is most often reported around Mt. Hiba and its name means "Hiba monster". it is said to be the height of a small human (5'3" to 5'8") but powerfully built and covered with dark brown hair.

A while back I found some photos of an interesting netsuke on an internet photo search. Netsukes are little carved figures meant to hold cords that in turn hold objects onto a kimono's belt. these ones were for sale as collectible antiques, from the 17-18th century of before. This was labelled as a Japanese macaque ("Monkey, but that was the only KNOWN monkey locally) but it resembles a chimpanzee much more closely. The form of the head, facial features, and the indicated type of hair on the body all look like a chimpanze, but especially the form of the hands and feet. And on the bottom view, you can see that it has no tail. The Japanese macaque does have a short stumpy tail which would show from that angle, and the heels are broad and wide, indicating something more like a chimp than a macaque.

So I am going to say this is a representation of a native ape of Japan. I have seen other similar depictions in Japanese art but this is far and away the clearest example. There are also parallel Chinese depictions (statuettes) but they would presumably be depicting the Yeren instead. Some of the Chinese ones are notable for their very long, orangutan-like arms.

Fossil Ape Candidate for Hibagon (From a Japanese Website) 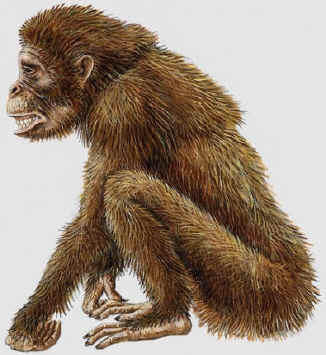 Butterflies are both beautiful and vital to the health of our environment. Their survival is crucial yet they are in serious decline. Be part of the big butterfly count from the 24th July to the 1st of August this year and help us gather information to save them.

Just find a place where you might see butterflies, such as a garden or park, and count the different butterflies you see in just 15 minutes. You can make counts in several places during the week. Submit your sightings at http://www.bigbutterflycount.org/ and you'll receive 10 per cent off plants when you shop online at M&S. *

Butterflies are disappearing fast and we can’t help them without your support. See the website for details.

Please forward this email to your friends of relatives - the more people who join in, the more accurate a picture we can build of our changing butterflies.

*Terms and conditions apply. See www.marksandspencer.com/offers for details.
Posted by Jon Downes at 12:12 PM No comments:

Is it true that you have found a link between Japanese monsters and certain Scottish lake-monsters, and that because of the Scottish link, the new volume will be called "Yokai The Noo"?
Posted by Jon Downes at 12:12 PM No comments:

Nick writes: England's Stafford Post newspaper reports on the engaging story of Stafford Castle's pet tortoise, who appeared to have lived and died at some point in the 19th Century, but who - in 2010 - is once again in the news! If only he or she knew!

However, interesting though the story is, the Stafford Post seem to be making somewhat of a journalistic mountain out of a molehill, because over 100 years before, Gilbert White (18 July 1720 – 26 June 1793) had a pet tortoise, and there is anecdotal evidence for pet tortoises in quite a few books published in, or written about, the late Victorian era, such as Stalky and Co by Kipling, and E Nesbit's The Five Children and It.
Posted by Jon Downes at 12:06 PM No comments: 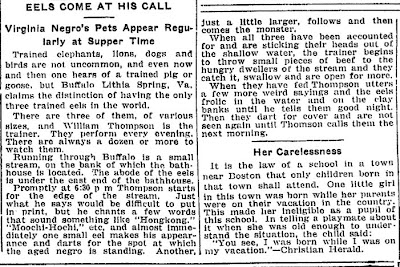 We have always been interested in eels here at the CFZ, and in particular the freshwater eels of the genus Anguilla. Indeed there is a fat and rather smug specimen of A. anguilla who lives in a 48in tank in the corner of my study. Oll, with his fetish for all things Welsh named him Ee-I Jenkins after the Vicar in Under Milk Wood and we are all rather fond of him.

Knowing of our interest in all things anguilliform, Robert Schneck has sent us three classic clippings about educated eels which prove, (as if any proof were needed) that eels are very peculiar fish. This final one is from "Boston Sunday Globe" September 23, 1917
Posted by Jon Downes at 11:55 AM No comments:

RICHARD FREEMAN: The Legends of Lincolnshire #7

Telling the Bees of Death
In common with many other areas it was thought that bees should be told of a beekeepers death. The Stamford Mercury, April 15, 1870 ran a story on this topic. Whilst staying a short time at Stallingboro' (a Marsh village) some thirty years ago [I was] present at a full observance of the superstition. . . .

It was a few days after the death of a cottager, when a woman staying with the bereaved family asked the widow, ' Have the bees been told? ' The reply being no, she at once took some spice cake and some sugar in a dish, and proceeding to the hives, placed the sweets before them ; then, rattling a bunch of small keys (I suppose to attract the attention of the indwellers), she repeated this formula :

The story elicited the following response.

Being at a neighbour's house about a month ago, the conversation turned upon the death of a mutual acquaintance a short time prior to my visit. A venerable old lady present asked, with great earnestness of manner, ' Whether Mr. R.'s bees had been informed of his death ? '

(Our friend R. had been a great bee-keeper.) No one appeared to be able to answer the old lady's question satisfactorily, whereat she was much concerned, and said : ' Well, if the bees were not told of Mr. R.'s death they would leave their hives, and never return. Some people give them a piece of the funeral cake ; I don't think that is absolutely necessary, but certainly it is better to tell them of the death.' Being shortly afterwards in the neighbourhood of my deceased friend's residence, I went a little out of my way to inquire after the bees. Upon walking up the garden I saw the industrious little colony at full work. I learned, upon inquiring of the house- keeper, that the bees had been properly informed of Mr, R.'s death.

I found that in my own family, upon the death of my mother, some five-and-twenty years ago, the bees were duly informed of the event. A lady friend also told me that, twenty years ago, when she was at school, the father of her school-mistress died, and on that occasion the bees were made acquainted with his death, and regaled with some of the funeral cake.
Posted by Jon Downes at 11:54 AM No comments: 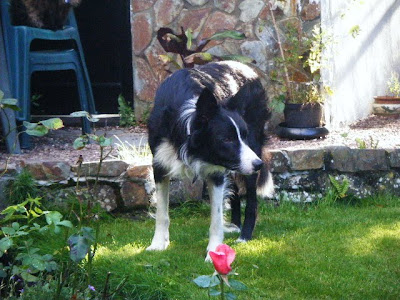 Yesterday I spent a considerable time toiling upon a new project about which I will tell you very soon. Corinna made us all (me, her and the two folk with whom I have been working on the aforementioned project), a very nice dinner, and at about 9:30 I was overcome by tiredness, so bidding goodnight to everyone I went upstairs with a half bottle of cheap brandy that I had been given last week by Jim Jackson of the Appledore Book Festival.

I had a shower, and collapsed into bed. I slowly drank the brandy whilst watching a documentary about Johnny Cash on BBC4. I then had my medecine, drank more brandy 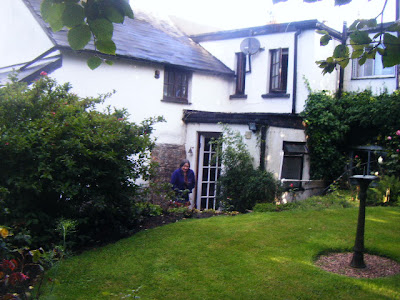 and watched a documentary about Hank Williams as I drifted off into the arms of Morpheus.

Just as we were all just about to learn the sad details of Hank's lonesome death on New Year's Day six years before I was born, Corinna came in looking very worried.

She, by the way, has done her back in and has been in considerable pain for the last few days. However this was not the problem.

It turns out that despite having had a perfectly normal day, and a perfectly normal evening, Biggles had a `funny turn` as he went outside for his night time commune with nature, and was wandering around as if he was drunk. I suspect that he had eaten a toad, but cannot be sure of that.

I rushed downstairs (which is not an easy task when full of brandy, tegretol and amliodipine) and found Biggles hunched up in his favourite chair twitching (and I don't mean looking for rare birds). Corinna and I sat with him until she made me go to bed (I am continuing work on the aforementioned project today, and needed some sleep at least). I slept fitfully, fearing the worst and at about 6:30 came downstairs.

As always, my paranoia wasn't justified. Corinna had stayed up with Biggles on the sofa, and he was a little better. Bizarrely, when she let him out for a pee, he became far more animated and almost back to usual, and when I went back to bed he came with me and spent the next hour snoring loudly in my left ear.

Corinna, however, has - not by any means for the first time - skipped a night's sleep and is refusing to do the "love, honour and obey" thing and go to bed for a while. Instead she is shuffling around the house, still in pain from her bad back (discomfort she says stoically, not pain), with the peevish look on her face usually worn by Tove Jansson's Little My. Goodness me.