HAUNTED SKIES: (Not so Magick) Mushroom

http://hauntedskies.blogspot.com/2011/04/not-magic-mushroom-blog-of-nature-today.html
Posted by Jon Downes at 1:43 PM No comments:

On this day in 1994 the first discoveries of extra-solar planets were announced.

And now the news:
Fossilised spider 'biggest on record'
Motor boat turbulence kills zooplankton in estuari...
Iran: Dog Ownership to Be Outlawed Under Lawmakers...
Only hillbilly hunters have ever seen one alive
Badger vaccine pilot planned by National Trust in ...

ON THE TRACK OF UNKNOWN... 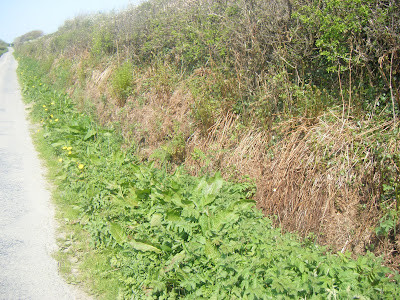 Yesterday Graham and I went in search of an animal not seen in our part of North Devon for over thirty years. Like so many cryptozoological creatures, it is ethno-known, and our search was triggered by a chance encounter that a visiting fortean had with one of these animals.

Graham and I finally ran it down after an exciting car chase down twisting lanes, and we have conclusive proof of its existence.

I lived in Woolsery between 1971 and 1981, and most springtimes I would get on my bicycle and go up to the edges of Huddisford Woods (yes; the place where we got the big cat hairs last year), and look at the orange tips.

Anthocharis cardamines is one of my favourite British butterflies, probably because it reminds me of my favourite butterfly from my childhood in Hong Kong. However, for some reason or another, they were never common in Woolsery, and began to die out in about 1977, and by the beginning of the decade that taste forgot, they had vanished.

At the weekend Dawn Holloway of the Haunted Skies Project told me how common they were this year in her back garden in Redditch, and I bemoaned the fact that I had not seen them in Woolsery for many a year. I even told her that each year I drove up to the borders of Huddisford Wood looking for them, to no avail.

The next day (with a slightly `I told you so` look in her eyes LOL) she told me that there were plenty of them along the lane from the campsite at Ashcroft Farm to Huddisford. So today Graham and I went looking for them, and we saw five or six males. We followed one along one of the lanes, and were surprised to see it travel for over half a mile without any seeming signs of exhaustion.

We later saw another three males at another location (Kennerland Cross) where I had never seen them before. The species is certainly back, and in some numbers. We shall be going back there tomorrow to see if we can ascertain how many of the `white` butterflies that we also saw were this species rather than green-veined, large, or small whites (P.napi, P brassica, and P.rapae). Watch this space....
Posted by Jon Downes at 1:17 AM No comments:

Posted by Jon Downes at 1:16 AM No comments:

LIZ SLADEN DIED YESTERDAY - for those of us of a certain age, the world is a poorer place Posted by Jon Downes at 1:01 AM No comments: