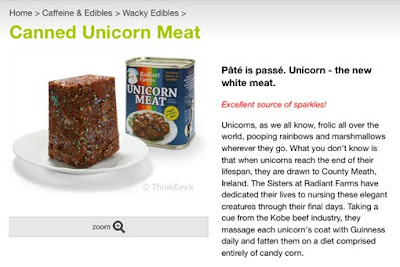 During my life I have tried many unusual foods, from chocolate-coated mealworms to Impala while I was in Kenya. If fact, while I was in Kenya I was intrigued to see 'lion steaks' on the hotel's laminated lunchtime menu and inquired of the waiter as to just how many people order the lion meat.

Anyway, I digress. The reason I mention unusual food is because of a certain product that was featured on the Think Geek website last April: Canned Unicorn Meat.

As you might well have guessed, this was an April fool made by the website. The website's description of the product is as follows:

Unicorns, as we all know, frolic all over the world, pooping rainbows and marshmallows wherever they go. What you don't know is that when unicorns reach the end of their lifespan, they are drawn to County Meath, Ireland. The Sisters at Radiant Farms have dedicated their lives to nursing these elegant creatures through their final days. Taking a cue from the Kobe beef industry, they massage each unicorn's coat with Guinness daily and fatten them on a diet comprised entirely of candy corn.

As the unicorn ages, its meat becomes fatty and marbled and the living bone in the horn loses density in a process much like osteoporosis. The horn's outer layer of keratin begins to develop a flavor very similar to candied almonds. Blending the crushed unicorn horn into the meat adds delightful, crispy flavor notes in each bite. We are confident you will find a world of bewilderment in every mouthful of scrumptious unicorn meat.

It also included the slogan 'Unicorn meat: the other white meat.'

And this was when things got really interesting...

In June this reached the ears of the USA's National Pork Board and they were not impressed. In their anger that one of their slogans ('the other white meat') was being used to apparently market this new meat they rattled off a cease-and-desist letter to Think Geek. However, they didn't stop to question whether the flesh of a mythical animal not recognised or discovered by science could really be farmed and sold by the can. The letter was, according to Think Geek, 12 pages long and well researched, so probably made some lawyers a lot of money, but in no place mentioned that the 'product' was actually non-existent and a parody. As a result of the product being an obvious parody that in no way caused harm to the pork board, there was no actual legal case to answer and the letter overlooked this. Think Geek were good enough to issue a public apology for any confusion caused:

It was never our intention to cause a national crisis and misguide American citizens regarding the differences between the pig and the unicorn," said Scott Kauffman, President and CEO of Geeknet. In fact, ThinkGeek's canned unicorn meat is sparkly, a bit red, and not approved by any government entity.

Companies do have to protect their trademarks from being used by others in for nefarious purposes but this is perhaps the funniest example of using a sledgehammer to crack a nut that I have seen.
Posted by C-E B at 11:53 PM No comments: 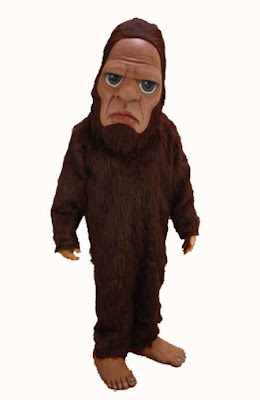 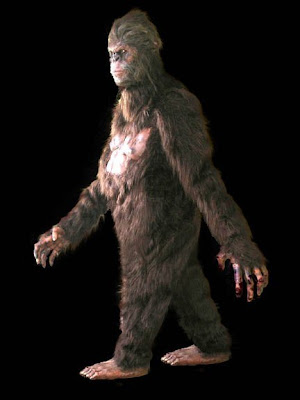 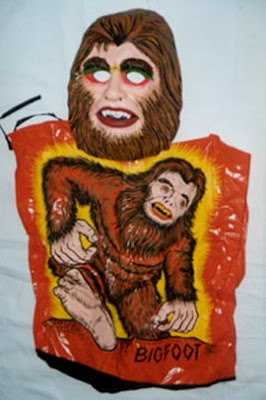 Bigfoot seems to be the favoUrite cryptid costume.

Simple, but the drawing is charming.

One of my favourite zooform stories pertains to Mount Pilchuck in Washington State and dates back to 1981. The following story reminds me very much of an ingredient in my favourite television show of all time, Twin Peaks.

Picture the scene: the town of Granite Falls. A quiet restaurant is disturbed by the entrance of several police officers. They are accompanied by two other men, one who is visibly shaken. The officers are attempting to calm the man down and coffee is ordered quickly from the waitress who has had her afternoon peace shattered by the commotion.

A woman sitting behind the officers with her son can hear the conversation, and what she takes note of is an incredible and disturbing series of events. It seems that the military were called in after two car-loads of people travelling on a remote part of the mountain were attacked by a huge winged creature. The vehicles had suffered deep scratch marks and the military took the witnesses away.

The creature was described by the shaken witness as being around eight feet in height, with leathery wings, large feet and reptilian in nature. It seems that the witnesses were on their way to a picnic and were parked up on a slope when they noticed what seemed to be a hang-glider. They couldn’t get a decent view of the object as the bright sun shone in their eyes. The object approached from the sky and it was then that the horror was realised. The observers ran for their cars, turned around and sped down the mountainside. One driver, in his panic, drove into a ditch as the winged entity swooped down, clawing at the car. It was alleged that one of the car occupants had a heart attack after the fright. The other vehicle zoomed off to get help and the military swarmed the area within the hour. A large truck took the damaged vehicles and the witnesses were ushered into a military ambulance.

Nothing else was ever heard of the incident, and it was alleged that two years later the local Police Department containing all the files, mysteriously burned down.

However, this wasn’t the first time that mysterious winged creatures were observed in Washington State. In 1948 it was claimed that a winged humanoid was sighted in Chehalis and Longview.
Posted by C-E B at 11:26 PM 3 comments:

No, it's nothing weird. I was really thirsty when I got off the bus this morning so I nipped into the baker's on my way home to buy something to drink. Go-Rilla (why the hyphen, I have no idea) is the brand that makes orange juice from concentrate in aid of the Gorilla Organization.

This charitable institution, which tries to prevent the extinction of the world's few remaining gorillas, was founded as the Digit Foundation by Dian Fossey, whose famous work was the subject of a Hollywood film, and has gone through a couple of name changes since its inception.

But the sterling work continues.

I'm not going to pretend that Go-Rilla tastes any better than the supermarket own-brand orange juice that costs 50-odd pence a litre, but Go-Rilla is helping to conserve a beautiful species of primate we would be poorer as a planet without.

The company website is still under construction but please keep an eye out for when it's up and where Go-Rilla is being sold near you.
Posted by C-E B at 11:24 PM 3 comments:

A mixed bag of items on the News Blog today, which, incidently, is the anniversary of the Hungarian Uprising (1956).