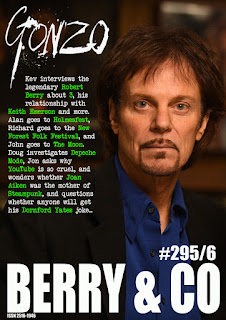 Gonzo Weekly #295-6
THE BANISHING THE SUMMERTIME BLUES BUMPER ISSUE
http://www.gonzoweekly.com/
In this remarkably eclectic issue, Kev interviews the  legendary Robert Berry about 3, his  relationship with Keith Emerson and more. Alan goes to Holmesfest, Richard goes to the New Forest Folk Festival, and John goes to The Moon. Doug investigates Depeche Mode, Jon asks why YouTube is so cruel, and wonders whether Joan Aiken was the mother of Steampunk, and questions whether anyone will get his Dornford Yates joke... YOU CANNOT GET MUCH MORE ECLECTIC THAN THAT!

And there are radio shows from Strange Fruit, Mack Maloney, AND Friday Night Progressive, AND there are columns from all sorts of folk including Kev Rowlands, the irrepressible Corinna, Neil Nixon, Roy Weard, C J Stone, and Mr Biffo. There is also a collection of more news, reviews, views, interviews and red kangaroos who've lost their shoes (OK, nothing to do with the largest extant macropods who are in a quandry with regards their footwear, but I got carried away with things that rhymed with OOOOS) than you can shake a stick at. And the best part is IT's ABSOLUTELY FREE!!!

ON THIS DAY IN -   1376 - The legend of the Pied Piper of Hamelin leading rats out of town is said to have occurred on this date.
And now some more recent news from the CFZ Newsdesk