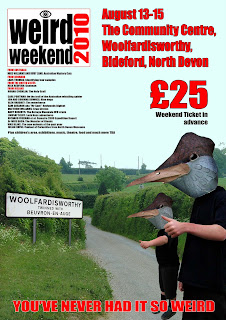 * They are dropping like flies. There has been another line-up change. Glen Vaudrey writes:

Just confirming what I spoke to you earlier about.

It is with great sadness that I will not be at this year’s weird weekend. This is due to some cretin stealing the signaling wire in the Heald Green area of Manchester. This has stopped the trains to the airport and we only found out when the train journey came to a premature end. Sadly we are too strapped for cash for any alternative transport plans and will not be therefore able to make it. I guess that the water horses will have to go back into the stables for another year.

I hope that nobody notices my absence and that the weekend is a great success.

The latest version of the programme is at http://www.weirdweekend.com/

With only a few hours left haven't done so already, now might be a good time to buy your tickets to the best crypto-fortean event of the year....

Buy Your Tickets here
Posted by Jon Downes at 11:33 AM No comments:

After my survey and commentary on mystery primates of the world,
I thought it would be instructive to compare the results of my reassessment of the cryptid large primate categories as compared to the cryptid large marine creatures categories (comparing the Abominable Snowmen to the Sea-serpents, more or less)

In the case of Heuvelmans's Sea-serpents, the nine cryptid categories were:

out of which I discount true giants, marked hominids, neandertaloids, erectus hominids and proto-pygmys, the last four of them on the grounds that they are not only probably variants of one species, but that species is most likely not separable from Homo sapiens. I retain the categories neo-giants, unknown pongid, giant monkeys and allow the mer-beings but also keep that category as a questionable status.

In this case, the categories unknown pongid, giant monkey and merfolk are NOT unified categories representing a single cryptid as a single species per category. The categories are thus also invalid as formulated. However, in each of those categories I have also eliminated some candidates such that the unknown pongids of Africa are removed from unknown status - they are very likely displaced or unusual chimpanzees and gorillas. The remaining Asiatic and American pongids are all mostly like orangutans and do form a recognisable sequence, although they are not belong to the same species and it is doubtful that they would all belong to the same genus. By the same token, ALL of the giant monkeys are very likely merely outsized monkeys of known species, except for the South American Isnachi. It should be noted that it was a major error to make one category for both Old World and New World monkeys in the same group. The presumed chupacabras creature is likewise a composite based largely upon reports of canines (hairless or on the activities of feral dogs in general) and the classical merfolk creature is possibly a sort of highly adapted marine monkey out of the macaque stock originally, evolved to the point that the typical monkey tail has become something like a dolphin's tail. This does involve a great deal of speculation and if such a creature does exist, it might very well qualify for at least familial distinction from its nearest relatives.

Essentially in both lists of nine candidates, I have taken out two thirds of both lists because they fail to meet my criteria for representing well-defined cryptids, left only three of the nine as well-defined probable new forms of animal life, and allowed the last one as possible but not perhaps as probable in each case.

As far as the categories in Coleman et al's The Field Guide to Lake Monsters... it would seem at first to be a version of the sea serpent categories supplied by Heuvelmans with additions but in fact, the categories are broad enough that they can be reworked to accomodate any possible aquatic cryptids: only such categories as unidentified bony fishes and unidentified lampreys are needed to make a general catalogue of any aquatic creatures that could be reported. The categories would of course need to be fine-tuned a bit more such that the 'mystery manta' category should cover unknown freshwater stingrays as well and thus be on a par with the 'mystery sharks' category that replaces 'giant shark' and so on down the line.

I shall admit that my processing of the nine categories in each instance has some unusual parallels but I would tend to see that as an indicator of how much of the material gathered tends to turn out to be useful, as a general proportion in any largescale inquiry of this nature, rather than some individual quirk I have in looking at cryptozoology. I suppose it would represent a measure of methodological stringency on the researcher's part that I tend to dismiss 2/3 of the cases and concentrate on examining the remaining third in greater detail.
Posted by Jon Downes at 11:32 AM 1 comment:


As regular devotees of the CFZ will know, we have always been interested in large specimens of the European eel. Max has found a rather interesting story from Cumbria....
Posted by Jon Downes at 11:28 AM No comments: 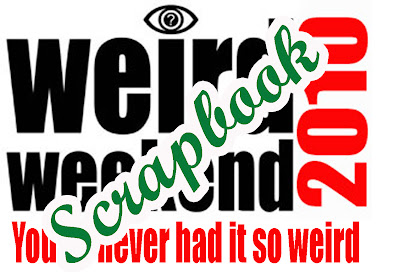 The Weird Weekend cocktail party took place yesterday evening and in contrast with last year's event, which got a little out of hand with too much noise and 120 high spirited drunks bouncing around my garden, it was a jolly and well behaved event.

About 35 people were there, which was a little disappointing; it would have been nice to have a few more, but it was great fun, and - just like the old days - Olivia, Ivan, Max, Richard F, Dave Baldwin, Gavin L-W, Corinna and I sat around in my kitchen with Biggles, and chewed the fat until the wee small hours. 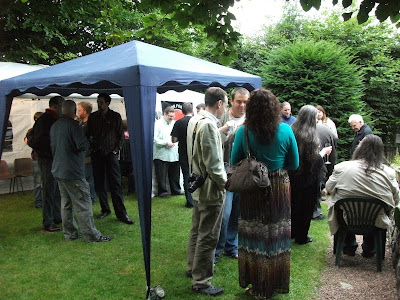 First up this morning was Olivia, followed by Biggles and me. Only Ivan looked at all worse for wear.

When I was a young punk a band whose name I completely forget issued a press release stating that the lead singer categorically denied that he had been having an affair with Farrah Fawcett. It was a particularly tawdry publicity stunt and worked so well that I can't remember who they were.

A peculiar rumour seems to have been doing the rounds. 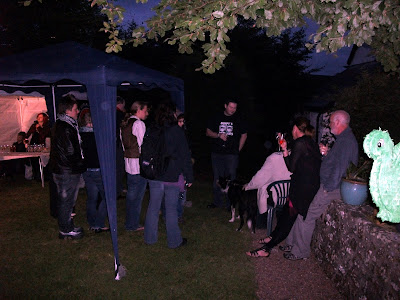 Apparently someone on Facebook has been claiming that the special guest we have advertised on Saturday afternoon is Stephen Spielberg. The world famous director dude is currently filming on Dartmoor, but has NOT been booked to appear at the WW and I think that it is monumentally unlikely that he has even heard of the CFZ, let alone planning to visit us.

I am mildly annoyed about this because I would hate anyone to think that we would stoop to planting false stories in the press and on the internet in order to boost ticket sales.

We leave that sort of chicanery to other people.
Posted by Jon Downes at 11:25 AM No comments:

Last night saw the opening of this year’s Weird Weekend with the traditional cocktail party. Margaritas and wine were the order of the night and these did indeed add an intended air of sophistication to the occasion. It was a quiet night, far removed from last years bustling get-together, but regardless, it was a great night that offered ample opportunity to chat to friends new and old about a range of esoteric subjects including spiders, expeditions, prog music, lesser known cryptids and whiskey.

Anyway, it was great to chat to some new people such as Carl and Susan Portman (who, by the way, have a book out now by CFZ Press), and Patrick Noble, all of whom will certainly enjoy the rest of the weekend. Anyway, excuse the brief posting, but it is very nearly time to start showing people around the CFZ grounds….
Posted by Jon Downes at 11:18 AM No comments:

FORTEAN WORDS IN THE PRESS 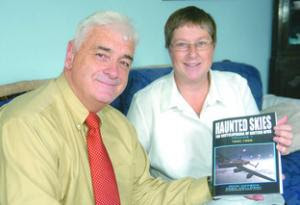 AN Alvechurch couple who have spent approximately 16 years researching UFOs, have seen their first book on the subject published. John Hanson and partner Dawn Holloway have been working on a series of volumes dating from 1940 to 2008 which catalogues a day-by-day account of UFO activity in the UK. Read on
Posted by Jon Downes at 11:06 AM No comments:

On this day in 1946 H.G. Wells died. Wells was perhaps the greatest science fiction writer ever; creating classic stories such as The Time Machine and War of the Worlds.
And now, the news:

And, as if by magic, a vaguely related song/ video clip:

http://www.youtube.com/watch?v=CQsHRpIUVuI
Posted by Jon Downes at 10:28 AM No comments: