ANOTHER PAT ON OUR BACK

This morning I posted the 6,000th post on this blog. When you add nearly 5,000 posts on the news blogs and all the posts on the other blogs in the CFZ Bloggo network, and realise that this is all since January 2009, I think we have all done remarkably well. I would like to thank everyone who has worked together to make this possible. But enough of complacency; there is plenty more work to be done!
Posted by Jon Downes at 12:36 PM No comments: 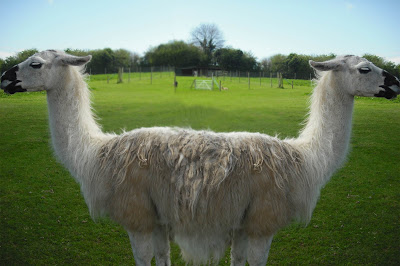 They do exist, Mum; you were right all along - ha ha ha. (EDITOR'S NOTE: One wonders whether Mr B-P had been influenced by the recent article on the life and works of the late Dr D by the eminent - and not late - Dr S).
Posted by Jon Downes at 12:27 PM No comments:

Although classic zooform monsters such as the Jersey Devil and Mothman have embedded themselves deeply in folklore, history suggests that equally absurd critters have, albeit briefly, prowled the globe, yet without recognition.

Bear ? Gorilla ? Horse ?
The Milwaukee Sentinel of 7th August 1949 ran a bizarre story concerning an unfathomable monster said to be prowling East Granby, Connecticut. Under the headline: ‘Galloping Ghost Animal With Claws Has Town Sweating’, the paper stated, ‘Bear ? Gorilla ? Horse ? – Or is it some weird, mysterious animal ? Uneasy residents in the Lake Basile section here asked those questions today after reports got around that there was a strange animal in the neighbourhood. The best description they could give was that it gallops like a horse and has the claws of a bear. No one has seen it. Some have heard it. But there for all to see were its claw-prints on the soft dirt road. Morgan J. Horne was among those who reported hearing it – at 10 minutes past midnight.
“It was nothing like I have ever heard before,” he said. “My wife had a horrified look on her face.”

The animal’s breathing, he reported, was “terrific, almost unbelievable” and a lot heavier than that of a horse.
“When we heard this galloping noise and the heavy breathing, our English sheepdog, Buddy, went crazy,” said Horne. “He almost went through the screen.”

Maybe the animal was two animals. An examination of the prints by Detective Anton M. Nelson of the State police suggested that. He said there were two sets of prints side by side, one large and one small. Sportsman Ronald I. Miller opined: “Must be either a bear or gorilla.”

Some believed the animal was a wolf, others a ‘panther’, the less dramatic reports suggested a deer or a dog. The paper commented, ‘A week ago, Mrs George Sloan said she saw a large cat-like animal near a shed in suburban Ste. Anne de Bellevue, on the west end of Montreal Island. That started it.’

Tracks, showing a main pad and four toes were discovered by a posse of hunters and museum creator and zoologist D.J. Cleghorn remarked that the prints were made by a ‘panther’ – in this case a mountain lion. Game warden Edward Kent stated that the animal was simply a deer and that he had “investigated that carefully” despite the fact prints left by a deer are completely unlike those made by a cat. Due to their elusive nature, the cougar (puma, mountain lion) has been given the name ‘ghost cat’ and ‘shadow cat’. During the nineteenth century the animal was dubbed ‘Indian devil’. The cougar, driven out of some parts of the United States is slowly making a comeback, but scepticism is still rife towards their existence hence the fact such animals have become relegated to folklore.

No Longer Ghouls On Horses!
Under the heading, ‘A Recent Ghost’, the New York Times reported on December 8th 1884 a bizarre animal ghost story stating: ‘There is a ghost in Cleveland, Ohio, who rides furiously up and down the street at night clad in appropriate white and mounted on a cow. We need ask for no further information as to the moral character of this particular ghost. It is clear that this ghost resides in a locality where there are no horses or where his local reputation is such that he cannot be trusted with a horse. The number of ghostly horses must be almost incalculable, judging from the number of horses that leave this world every year. That in the other world horses are made happy, as some slight recompense for their sufferings here, no charitable man will doubt. Obviously, then, ghostly horses must occupy a division of Paradise, where, of course, they can meet only with respectable ghosts. Wicked ghosts doubtless go where there are no horses, and hence must either give up riding or mount some disreputable animal – a ghostly cow for example. Te ghost who parades in Cleveland mounted on a cow has, in the language of our city statesmen, given himself away. He has advertised the fact that he belongs to a gang of ghosts who are unable to obtain horses, and that fact proves that he is a disreputable ghost who deserves nothing but arrest and punishment.’
Posted by Jon Downes at 12:24 PM 2 comments:

http://hauntedskies.blogspot.com/2011/04/lionel-albert-and-jon-downes.html
Posted by Jon Downes at 12:24 PM No comments:

On this day in 2005 the final piece of the Oblix of Axum was returned to Ethiopia by the Italians. http://en.wikipedia.org/wiki/Obelisk_of_Axum

That rocks...
http://www.youtube.com/watch?v=iL3mYAsEp9g
Posted by Jon Downes at 12:23 PM No comments: